"... the Obama administration has recently extended a contract with Blackwater for more than $20 million for 'security services' in Iraq. ..." 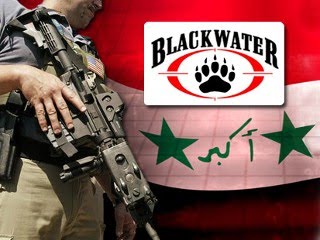 New disturbing charges have emerged against XE, the infamous private security firm formerly known as Blackwater Worldwide, whose operations came under spotlight after its 2007 carnage in Baghdad.

According to a report by MSNBC and based on alleged sworn declarations by two Blackwater employees in federal court, the firm used child prostitutes at its compound in Baghdad's fortified Green Zone.

The declarations added Iraqi minors got involve in sexual acts with Blackwater members in exchange for one dollar, and Erik Prince, the firm's owner, "failed to stop the ongoing use of prostitutes, including child prostitutes, by his men."

Based on other statements, the firm was involved in another sex scandal; "Prince's North Carolina operations had an ongoing wife-swapping and sex ring, which was participated in by many of Mr. Prince's top executives."

The two employees also alleged that Prince "views himself as a Christian crusader tasked with eliminating Muslims and the Islamic faith from the globe," The Nation reported.

Prince also allegedly forced health professional to endorse the redeployment of those Blackwater members who had been mental problems, such as excessive drinking and drug abuse. Other charges against the firm include arms smuggling, money laundering and tax evasion.

The criminal activities of the firm first came under scrutiny after a group of the firm's members who were tasked to guard US diplomats in Iraq opened fire on civilians in Baghdad on September 2007, killing 17 people.

According to federal contract data obtained by The Nation, the Obama administration has recently extended a contract with Blackwater for more than $20 million for "security services" in Iraq.

In a US courthouse in the colonial town of Alexandria, lawyers are trading allegations - including accusations of gun-smuggling, death threats and a crusading hatred for Islam - about one of the most traumatic moments in the Iraq war.

The target of many of the claims is Blackwater, the private security company now known as Xe, which lost its licence to operate in Iraq after 17 Iraqis were killed in a September 2007 shoot-out in Baghdad's Nisour Square.

While the US justice department is pursuing manslaughter charges against five former Blackwater contractors in Texas, this case in Virginia is a civil one, arising from the claims of survivors and the bereaved families against Blackwater itself.

In recent days, previous arguments in the Virginia case have been overshadowed by the extraordinary claims in two anonymous affidavits from US citizens who, on behalf of the plaintiffs, allege they saw crimes committed by Blackwater and its founder Erik Prince. He stepped down as chief executive this year but still serves as chairman.

"John Doe 1", who says he joined Blackwater after being honourably discharged from the marines, says he is anonymous because "I fear violence against me in retaliation for submitting this declaration . . . I have learned from my Black-water colleagues and former colleagues that one or more persons who have provided information or who were planning to provide information about Erik Prince and Blackwater have been killed in suspicious circumstances."

"John Doe 2" alleges more bluntly that "on several occasions after my departure from Mr Prince's employ, Mr Prince's management has personally threatened me with death and violence".

The North Carolina-based company itself did not respond to requests for comment by yesterday afternoon.

But, in a memorandum filed to the court this week in support of the defendants' motion to ask the court to limit the plaintiffs' extrajudicial comments, its lawyers denounced the "scurrilous assertions that, even if they were true, would be utterly irrelevant to any issue before the court," as well as "the campaign by plaintiffs' counsel to try this case in the media and the resulting prejudicial impact on potential jurors".

The memorandum adds: "Plaintiffs' counsel plainly engaged in an organised campaign to foment press coverage of the inflammatory and unsubstantiated allegations contained in the John Doe affidavits."

In his affidavit, John Doe 1 alleges that Blackwater used bags of dog food to smuggle weapons into Iraq and "knew that certain of its personnel intentionally used excessive and unjustified deadly force" while doing nothing to stop them. He recounts three undated incidents in which he said Blackwater employees fired without cause at Iraqi cars, with deadly results. He says the incidents were videotaped, but that personnel erased them.

John Doe 2 alleges that Mr Prince operated a web of companies to "obscure wrongdoing, fraud and other crimes . . . to avoid detection of his money laundering and tax-evasion schemes." He adds that Mr Prince "views himself as a Christian crusader tasked with eliminating Muslims and the Islamic faith from the globe [and] intentionally deployed to Iraq certain men who shared his vision of Christian supremacy, knowing and wanting these men to take every available opportunity to murder -Iraqis."

In a bizarre addition, John Doe 2's affidavit says: "Many of these men used call signs based on the Knights of the Templar, the warriors who fought the Crusades" and refers to a "wife-swapping and sex ring" run by "Mr Prince's North Carolina operations".

The defendants - including Blackwater companies and Mr Prince himself - have argued that the plaintiffs lack evidence, relying on "sensational and unfounded allegations" to prejudice potential jurors.