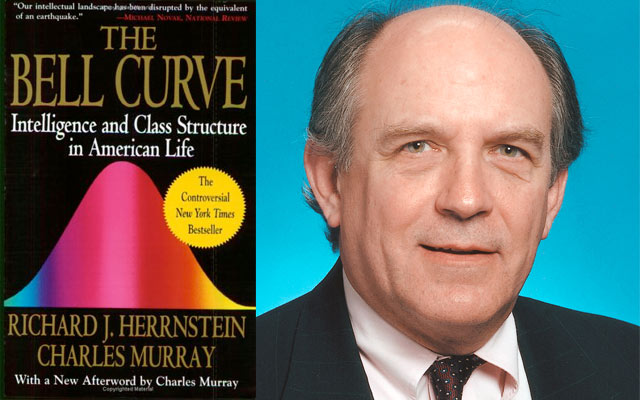 While many of us were commemorating the anniversary of Dr. Martin Luther King Jr.’s assassination yesterday, the influential neoconservative think-tank, the American Enterprise Institute, decided to have scientific racist and AEI fellow Charles Murray deliver a lecture entitled “The State of White America.”

Murray was billed to describe the evidence of “a new lower class and a new upper class that are different in kind from anything [America] has ever known” and its link to “the erosion of deeper sources of American exceptionalism.”

Murray gained notoriety in 1994 as co-author of a bestselling book “The Bell Curve” which promoted the idea of racial differences in intelligence. His argument was premised on the idea that blacks are genetically inferior to whites. Murray further tried to make his case that most social welfare and affirmative action programs were futile, since intelligence, he argued, was hereditary. The book was widely criticized as racist and scientifically unsound. Former New York Times columnist Bob Herbert wrote that the “book is just a genteel way of calling somebody a nigger.”

Much of the research Murray cited in the book was financed by the Pioneer Fund, a white nationalist foundation.

The Southern Poverty Law Center reported that AEI has sponsored several scholars in recent years whose views are seen by many as bigoted or racist. The think-tank also counts many Bush-era policy architects among its former and current scholars and fellows, such as Dick Cheney, Paul Wolfowitz, John Bolton, Lynne Cheney, as well as Newt Gingrich, and Ayaan Hirsi Ali.

On Anniversary of MLK Jr. Death, AEI Hosts Lecture on ‘State of White America’ By Author of The Bell Curve (Excerpt)

... The book was roundly criticized and debunked as “bad science,” an advancement of scientific racism, and much of its research was discredited. Former New York Times columnist Bob Herbert sums up what Murray and “The Bell Curve” are really about:

Now, in middle age, Mr. Murray gets his kicks by thinking up ways to drape the cloak of respectability over the obscene and long-discredited views of the world’s most rabid racists. And so “The Bell Curve,” written with Richard Herrnstein, who died last month, promotes the view that blacks are inherently inferior to whites.

“The Bell Curve” cited sources and studies bankrolled by the Pioneer Fund, an organization whose original mission was to pursue “race betterment” for peoples “deemed to be descended predominantly from white persons who settled in the original thirteen states prior to the adoption of the Constitution.” In addition, many references cited in the book were contributors to “Mankind Quarterly,” an English anthropological journal that has been accused of supporting theories of the white race’s genetic superiority.

The Return of Charles Murray, ‘Bell Curve’ Champion of the Master Race – And WaPo’s Got Him!