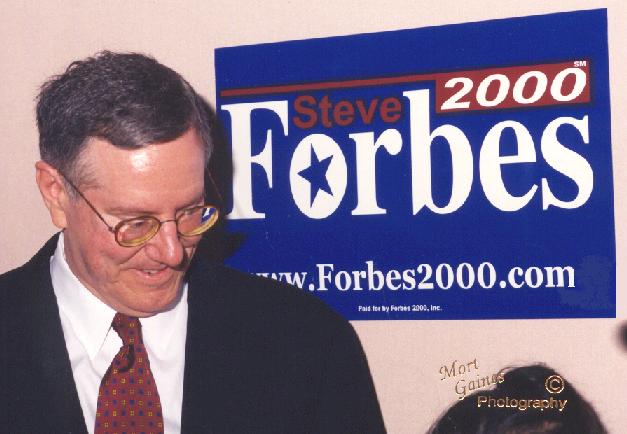 NEW YORK, NY Ð When Steven Forbes heads to New Hampshire for next week's Republican primary, he will be dogged by criticism of his relationship with Thomas Ellis, a former director of the Pioneer Fund, a foundation established in 1937 to prove that whites are genetically superior to blacks.

The timing of the disclosure of the millionaire publisher's link to Mr. Ellis couldn't be more inopportune for Mr. Forbes, who is coming off a disappointing fourth-place finish in the Iowa caucuses, where he barely edged out Senator Gramm and talk-show host Alan Keyes. Meanwhile, Pat Buchanan's surprisingly strong showing in Iowa is unnerving Jewish Republicans who are warning of a repeat of 1992, when the right wing of the GOP emerged as a potent force in the party during the convention.

The link between the presidential aspirant and Mr. Ellis, a member of the board of the Pioneer Fund from 1973 to 1977, was first established a couple of weeks ago when Mr. Forbes was campaigning in the Granite State and was fleshed out this week in a New York Times column by Bob Herbert, who described Mr. Ellis as an "informal adviser" to Mr. Forbes. Now, the extent of the foundation's involvement in controversial research projects, borne out in a background report prepared by the Anti-Defamation League, is threatening to cast an even larger shadow over his run for the Republican nomination.

What's particularly troubling to some is the fact that the alliance between Messrs. Forbes and Ellis dates back to at least the early 1980s. " The main point is that Forbes cannot deny knowing what's going on here because Ronald Reagan nominated both Steve Forbes and Tom Ellis to sit on the Board of International Broadcasting in 1983," says an associate professor of Humanities at Ferris State University, Barry Mehler, who has studied the Pioneer Fund. "Tom Ellis and Steve Forbes were side by side when Ellis was skewered by a congressional committee that asked him about his relations to the Pioneer Fund and the foundation's activities. So for Forbes to say he doesn't know anything about this is absolutely not credible."

Mr. Ellis was ultimately forced to withdraw as a nominee.

For his part, Mr. Buchanan has incurred the wrath of Jewish Republicans in the past by criticizing American aid to Israel and defending accused Nazi war criminals like John Demjanjuk. In an interview with the Jewish Telegraphic Agency, Matthew Brooks, executive director of the National Jewish Coalition, downplayed the conservative commentator's second-place showing in Iowa. "He is a rather large nuisance, like a little dog who is constantly barking at your heels," Mr. Brooks told the JTA.

Meanwhile, Gail Gans, associate director of the research department at the ADL, lambasted the scientific strategy of the Pioneer Fund. "The people involved have made a decision that black people are less intelligent than whites," Ms. Gans said. "It strikes me that a foundation that in 1996 is trying to prove the intrinsic superiority of a group of people ought to be ashamed of itself."

Nobody is accusing Mr. Forbes himself of being anti-Semitic or racist; what is in question is his judgment in aligning himself with a man like Mr. Ellis and then failing to distance himself from him at the first available opportunity. Abraham Foxman, national director of the ADL, said he has expressed concern about the relationship and is waiting to hear back from Mr. Forbes.

"Steve Forbes was, quite simply, an adamant opponent of anything that smacked of racial feeling," says David Frum, a leading conservative intellectual and former writer for Forbes magazine. "He managed an operation that was entirely free of PC (political correctness), but at the same time was multi-racial."

Based in Manhattan, the Pioneer Fund was founded in 1937 by Wickliffe Draper, a textile magnate and Nazi sympathizer who believed in the intellectual superiority of white Anglo-Saxons. Its first president, Harry Laughlin, spearheaded the movement to keep "genetically inferior" immigrants - including Jews - out of America.

Once a relatively obscure organization, Pioneer Fund entered the spotlight roughly two years ago following the publication of "The Bell Curve," a book that attempted to prove that race and class differences are largely determined by genetic factors. Some critics took issue with the book's scholarship, focusing specifically on its reliance on research subsidized by the Pioneer Fund. One such critic was Charles Lane, who wrote in the New York Review of Books that "The Bell Curve's" research was based on " tainted sources."

Responding to Mr. Lane's criticism, Charles Murray, co-author of the book, suggested in Commentary magazine that the Pioneer Fund had changed since its inception: "[T]he relationship between the founder of the Pioneer Fund and today's Pioneer Fund is roughly analogous to the relationship between Henry Ford and today's Ford Foundation." In the early 1920s, Henry Ford authored and published a host of anti-Semitic hate literature, including a book titled "The International Jew."

Mr. Mehler doesn't buy the analogy. "The Pioneer Fund has consistently supported scholars who are out to prove the inferiority of Afro-Americans," he says. "The goal of the Pioneer Fund is to promote eugenics and that has not changed."

Indeed, since 1981 the foundation has given hundreds of thousands of dollars to a variety of controversial researchers. According to Mr. Mehler' s research, the Pioneer Fund contributed more than $441,000 between 1981 and 1992 to the scientific efforts of J. Phillipe Rushton, a psychology professor at the University of Western Ontario in Canada. One of Mr. Rushton's theories is that blacks "have smaller brains, but reproduce at a faster rate, due to the allegedly larger size of their sexual organs," according to an ADL background report. In addition, Mr. Mehler says the foundation awarded $124,500 from 1991-1992 to Michael Levin, a philosophy professor at the City College of New York who has argued that black population growth must be slowed by ending public assistance.

Another recent beneficiary of Pioneer Fund dollars is Roger Pearson, author of "Eugenics and Race," a book published by a notorious Holocaust denier, Willis Carto. Mr. Mehler says that Mr. Pearson received $568,000 from the foundation between 1981 and 1991. For a brief stretch in the late 1960s, Mr. Pearson was editor of The New Patriot, a magazine created to explore "the Jewish question," which included such articles as "Swindlers and the Crematoria." According to the ADL report, Mr. Pearson now heads The Mankind Quarterly, a journal bankrolled by the Pioneer Fund that has published articles by Nazi scientists like Ottmar von Verschuer, a mentor of Josef Mengele.

For Mr. Forbes - who has been criticized in recent days for running negative campaign advertisements maligning his GOP colleagues - to regain his momentum, it may be necessary for him to repudiate Mr. Ellis and the Pioneer Fund. Says Mr. Mehler, "Forbes cannot run for president carrying along the baggage of Tom Ellis and the Pioneer Fund's history of racism, anti-Semitism and eugenics."