GOP Watch » Why Exxon Mobil is More Dangerous than BP 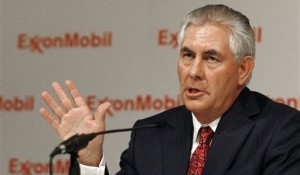 BP may be getting all the bad headlines these days, but Americans should probably worry more about Exxon Mobil.

Big Oil's financial sway over Congress and even the White House has been widely reported - with the overwhelming bulk of oil money going to Republicans.

But Exxon Mobil Corp. stands out among the nation's oil giants in one big way: it is quietly spending millions of dollars to fund an enormous, interlocking network of extreme right-wing "policy" groups, foundations and think tanks - often with innocuous names - working to shape public opinion and policy. A glance at the MediaMatters Conservative Transparency project gives the picture.

For example, Exxon has given more than $1.2 million to the American Council for Capital Formation. This group's website is filled with attacks on the climate bill now before Congress. Featured items include an op ed by its senior vice president, Margo Thorning, published May 18 in the Detroit News, headlined "Climate bill will stall Michigan's manufacturing engine."

According to the WSJ article, Bloomfield holds a monthly Washington dinner "for an eclectic group of members of Congress, corporate executives and journalists." The article says these gatherings "harken back to a less partisan and hurried time in Washington, when policy was often hashed out informally and off-the-record."

Exxon has given $1.6 million to the Competitive Enterprise Institute, which calls itself "a public interest group dedicated to free enterprise and limited government." CEI, says Sourcewatch, "postures as an advocate of ‘sound science' in the development of public policy. However, CEI projects dispute the overwhelming scientific evidence that human induced greenhouse gas emissions are driving climate change. They have a program for "challenging government regulations", push property rights as a solution to environment problems, opposed U.S. vehicle fuel efficiency standards and been a booster for the drug industry."

Then there's the National Center for Policy Analysis, which Exxon has given $520,000. It says its goal is "to develop and promote private alternatives to government regulation and control, solving problems by relying on the strength of the competitive, entrepreneurial private sector." It pushes Social Security privatization and health savings accounts, rather than the dreaded "Obamacare." Its website sports blurbs from Newt Gingrich and right-wing commentator John Stossel.

According to the National Committee for Responsive Philanthropy, the NCPA prides itself on "aggressively targeting key political leaders and special interest groups, establishing on-going ties with members of the print and electronic media, and testifying before Congress, federal agencies, state lawmakers, and national organizations."

Exxon is one of the top funders of the National Taxpayers Union, to whom it has given $315,000. NTU calls itself a "citizen group" advocating the flat tax - tax cuts for the rich, cutting government services, "individual liberty, and free enterprise." Grover Norquist was one of NTU's executive directors.

Exxon has given $531,000 to the Heartland Institute - another "free market" group that fights efforts to curb global warming and other environmental measures, and pushes school vouchers and privatization - and $385,000 to the right-wing Heritage Foundation. And on and on. MediaMatters has an extensive listing.

And Exxon Mobil, alone among the top oil corporations, has joined forces with extreme right-wing funders like the Koch and Scaife family foundations, and others less well known but equally far-right, in this vast stealth effort.

Exxon has given $1.9 million to the well-known right-wing American Enterprise Institute. That's small potatoes compared to $17 million for the AEI from the top funder of right-wing groups, the Wisconsin-based Lynde and Harry Bradley Foundation, which got its start with the proceeds of the Allen-Bradley Company, manufacturer of rheostats. Or the $8 million for the AEI from the right-wing Smith Richardson Foundation. financed by the Vicks VapoRub fortune. Or the $6.4 million from the Scaife Foundation, financed by the Mellon industrial, oil, and banking fortune. But it shows the kind of company Exxon Mobil keeps.

Exxon has given $265,000 to the Manhattan Institute, funded by the same collection of right-wing foundations. The Manhattan Institute, frequently cited as a source in major media like The New York Times, without any mention of the extreme-right nature of its funding, trumpets "market-oriented policies" and says it is aimed at "shaping American political culture and developing ideas that foster economic choice and individual responsibility." It holds forums and conferences, and produces publications, books and a quarterly magazine "City Journal."

Its website features a June 27 article in the New York Daily News by institute fellow Diana Furchtgott-Roth attacking the effort to pass a "living wage" law in New York City. She calls a "waste of money" a law that would require new projects that receive city subsidies to pay workers $11.50 an hour or $10 an hour plus health benefits.

Over and over, for what Hillary Clinton once perceptively called the "vast right-wing conspiracy," Exxon Mobil's name pops up among the funders.

The far right in our country isn't just tea party "wackos." To get to the root, a good place to start would be Exxon Mobil.

The US Chamber of Commerce is also complicit in pushing the de-regulation of the multinational corporations and a business paradigm that is subversive of American democracy and pushes the development of have-have not dictatorships in the US sphere of influence. My father was first an engineer then moved into top management at a shipyard in pittsburgh pa. My mother went to her grave hating the nazi Richard Mellon Scaife for the perversion of scripture that he pushed with his eugenics agenda. Solving the addiction problem in the US by paying people to get sterilized doesn’t deal with the socioeconomic and psychospiritual roots of the problem created by the self-serving criminal leaders in the US.