Britain Plotted Regime Change in Iraq as Early as 2001

" ... The documents also confirm that the quest to secure stable oil supplies was central to plans for the invasion of Iraq. ... An attached letter reveals that SIS4’s documents were read by then Foreign Secretary Jack Straw. Straw described them as 'very perceptive' and recommended that Prime Minister Tony Blair also read the files. The SIS4 files make clear that the moves against Iraq were very clearly based on 'regime change', which is illegal under international law. ... " 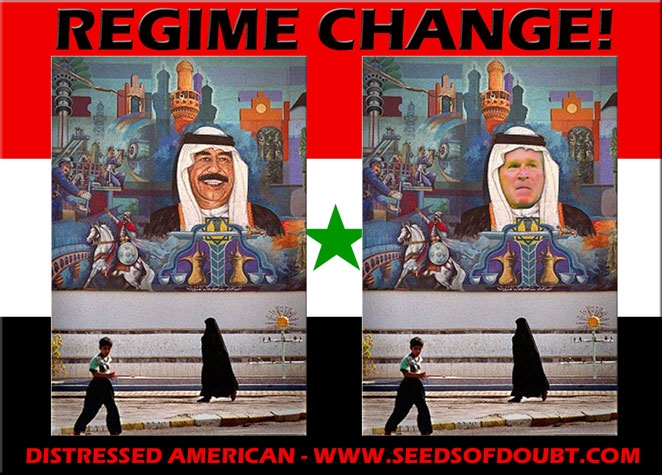 Previously classified documents released into the public domain reveal that Britain’s MI6 planned a coup against then Iraqi leader Saddam Hussein, just months after 9/11. This was despite official acknowledgement that there was no connection between the Hussein regime and Al Qaeda. The documents also confirm that the quest to secure stable oil supplies was central to plans for the invasion of Iraq.

The material was made public by the Chilcot Inquiry into the Iraq War, which is set to report by the end of this year.

Three documents written by a senior MI6 officer, “SIS4”, in December 2001 expose that plans for a coup, to be backed up by air bombardment, were under consideration at the highest levels of government.

An attached letter reveals that SIS4’s documents were read by then Foreign Secretary Jack Straw. Straw described them as “very perceptive” and recommended that Prime Minister Tony Blair also read the files. The SIS4 files make clear that the moves against Iraq were very clearly based on “regime change”, which is illegal under international law.

The information compiled by SIS4 was attached to the letter sent from the department of then MI6 head Sir Richard Billing Dearlove to Sir David Manning, Blair’s foreign policy adviser.

The document notes concerns in ruling circles that “US impatience” for war might threaten Britain’s wider interests in the region. Strategic planning in MI6 at that point was based on removing Hussein via a coup, which was “balanced, studied, planned and proportionate” and “better than bombing now”.

The letter states, “At our meeting on 30 November [2001], we discussed how we could combine an objective of regime change in Baghdad with the need to protect important regional interests which would be at grave risk if a bombing campaign against Iraq were launched in the short term”.

The letter proves a dirty conspiracy. The plan to back a coup against Hussein should be carefully concealed from the public, the document advises, under a section headed, a “new route map”.

“The key idea is that it is possible to speak openly about support for regime change in Iraq, without compromising the actual project to support a coup”, the documents say.

“The overall plan would need to be like an onion―each layer concealing the one below. The whole is a policy statement: ‘we want regime change in Baghdad and we are ready to provide air support to coup makers’. The inmost part is knowledge of the coup makers with whom we are in touch and their operational plan. The layers in between would need to include operational plans”.

The document confirms that MI6 understood that the Iraqi regime did not support Al Qaeda.

“There is no convincing intelligence (or common-sense) case that Iraq supports Sunni extremism”, it says. This flatly contradicts what Blair said on many occasions, including his January 2004 statement to the House of Commons that “We do know of links between Al Qaeda and Iraq. We cannot be sure of the exact extent of those links”.

Other documents prove the real motive force for the UK was access to Iraq’s vast oil reserves. The MI6 document states, “The removal of Saddam remains a prize because it could give new security to oil supplies”.

Sections of the document, which have been given hardly any coverage in the UK media, deal with MI6’s concern regarding the impact that a war against Iraq would have in the “street” ―a reference to the Arab workers and poor farmers.

Under the section, “factors in political reaction in the region”, its notes, “The Street will sympathise with the Iraqis and this will threaten Arab regimes”.

In the section, “US Attacks On Iraq: The Risks And Costs”, the document points out that the bombing of Iraq would risk, “Anger and resentment in the Arab Street. The bombing will been [sic] seen as an attack on ordinary Arabs, rather than Saddam. Consequent popular pressure on regional regimes, especially in the Gulf”.

Well aware of the criminal nature of their plans, the MI6 document raised the legal issues involved: “Government law officers to provide assurances of legality (there has been a serious problem here)”, the report states.

The inquiry also published a written statement from Major General Michael Laurie, a former high-level British intelligence official. This confirms that the September 2002 dossier presented by the Labour government, claiming that Iraq was an imminent military threat and was ready to use “weapons of mass destruction”, was known to be a pack of lies. At the time Laurie was the director general of Intelligence Collection in the Defence Intelligence Staff.

A draft intelligence dossier produced on September 16, 2002, contained an executive summary stating that intelligence allowed the government to judge Iraq “has military plans for the use of chemical and biological, some of which could be ready within 45 minutes of an order to use them”. The main text added, “The Iraqi military may be able to deploy chemical or biological weapons within 45 minutes of an order to do so”.

The following day members of the Joint Intelligence Committee (JIC) questioned the emphatic character of the assertion. But Blair’s Director of Communications Alastair Campbell advised JIC chairman John Scarlett, the dossier’s nominal author, that “may” in the main text was “weaker than the summary”. Scarlett responded by telling Campbell that the language in the main text has been “tightened”.

The dossier was finally published on September 24, 2002, with a foreword by Blair that focused on the 45-minute claim, an assertion that Blair then repeated in parliament.

In his letter to Chilcot, Michael Laurie refuted Campbell’s testimony before the inquiry in 2010. Campbell had denied that the purpose of the dossier was to make the case for war.

Laurie stated, “I am writing to comment on the position taken by Alistair Campbell during his evidence to you on the 12th of January when he stated that the purpose of the Dossier was not to make a case for war; I and those involved in its production saw it exactly as that, and that was the direction we were given”.

He added, “Alistair Campbell said to the Inquiry that the purpose of the Dossier was not ‘to make a case for war’. I had no doubt at that time this was exactly its purpose and these very words were used. The previous paper, drafted in February and March, known to us then also as the Dossier, was rejected because it did not make a strong enough case. From then until September we were under pressure to find intelligence that could reinforce the case”.

Laurie continued, “We could find no evidence of planes, missiles or equipment that related to WMD [weapons of mass destruction], generally concluding that they must have been dismantled, buried or taken abroad. There has probably never been a greater detailed scrutiny of every piece of ground in any country”.

“In summary”, he stated, “we knew at the time that the purpose of the Dossier was precisely to make a case for war, rather than setting out the available intelligence, and that to make the best out of sparse and inconclusive intelligence the wording was developed with care”.

In 2003 the BBC’s Today programme had reported that the dossier had been deliberately “sexed up”. Its report was based on a highly reliable but anonymous source―leading Ministry of Defence microbiologist and former senior United Nations weapons inspector in Iraq, Dr David Kelly.

The government then initiated a vicious witch-hunt, as a result of which Today reporter Andrew Gilligan, Greg Dyke, who was the BBC’s director general, and BBC Chairman Gavyn Davies were forced to resign.

Kelly was outted as the source and forced to testify before the Foreign Affairs Committee on July 15, 2003, and the Intelligence and Security Committee on July 16. He subsequently disappeared from his home and was found dead in woodland on July 18 in suspicious circumstances.

The Hutton Inquiry report in January 2004 exonerated the government of any wrongdoing in regard to Kelly’s death, claiming it was suicide.

Not only has the Chilcot inquiry now heard that the BBC report based on Kelly’s comments was true. It has taken evidence that confirms the attack on Iraq and subsequent invasion, during which hundreds of thousands of civilians have died and the country has been destroyed, was a pre-meditated war of aggression aimed at seizing oil supplies.

The International Tribunal convened in Nuremberg, under which the highest-ranking Nazis were tried at the end of the Second World War, designated a war of aggression as “the supreme international crime”.

Despite such damning evidence, the Chilcot inquiry can only lead to yet another whitewash of such war crimes. Established in June 2009 by the Labour government that had determined on war at all costs, its remit is limited to the “lessons that can be learned” regarding pre-invasion planning.