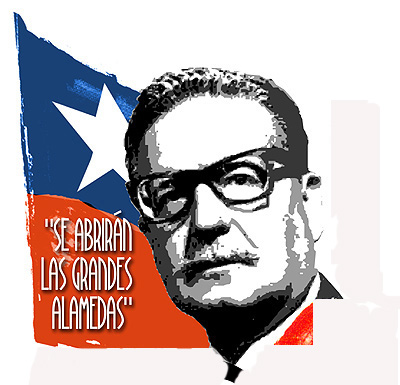 Chile's authorities are launching the first ever inquiry into the death of socialist President Salvador Allende.

His body was found in the presidential palace after it was attacked by troops and planes during the 1973 coup that brought Gen Augusto Pinochet to power. The investigation will seek to establish whether Mr Allende committed suicide or was killed by the military.

Thousands of Chileans were tortured and killed by the armed forces during Gen Pinochet's 1973-1990 rule.

The Allende case is one of 726 complaints of alleged human rights violations that were put before a special judge in the Chilean capital, Santiago, on Wednesday. The judge, Mario Carroza, said the investigation was a "tremendous responsibility".

The case was brought by prosecutor Beatriz Pedrals, who had been asked to identify human rights cases that had not so far been addressed by the judicial system.

"What has not been investigated, the courts will investigate," she said. "This will finally establish what happened".

Salvador Allende, who was 65, died in La Moneda presidential palace on 11 September 1973 as it was being bombed by air force jets and attacked by soldiers. What has not been investigated, the courts will investigate. This will finally establish what happened.”

An official autopsy found he committed suicide using a rifle given to him by his friend, the Cuban leader Fidel Castro. That conclusion was confirmed by his own doctor and accepted by his family, but has nonetheless been questioned by some of his supporters, who believe he may have been killed by soldiers.

The BBC's Gideon Long in Santiago says the investigation is likely to stir up bitter emotions in Chile, a country still scarred by the coup and the long period of military rule that followed.

Our correspondent says that for some, Mr Allende was a reckless Marxist intent on turning Chile into a new Cuba. For others, he was a democratic Socialist whose death remains the most potent of all the atrocities committed by General Pinochet's forces.

Salvador Allende came to power in 1970 as Chile's first democratically-elected Marxist president. He pursued a "Chilean path to socialism" nationalising industries and farms. But his radical policies polarised Chile and angered the US, which backed a military coup against him. The coup ushered in 17 years of rule by Gen Pinochet, during which more than 3,000 political opponents were killed or disappeared by the military and thousands more were imprisoned and tortured.

General Pinochet died of a heart attack in 2006 at the age of 91 while under investigation for corruption, torture and murder.

Michael Hayden and the Innocuous Face of Government Criminality