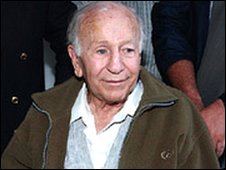 Paul Schaefer, a former Nazi corporal, established the colony in 1961

Paul Schaefer, a former Nazi corporal and founder of a cult-like community in Chile, has died in prison aged 88. He was in jail serving a 20-year sentence for sexually abusing children at the Colonia Dignidad, some during Chile's military dictatorship.

The former Baptist preacher established the colony in southern Chile in 1961, after fleeing Germany to escape separate child abuse charges.

He had close ties to Chile's elite during Gen Augusto Pinochet's rule.

Schaefer denied allowing Chile's secret police to use the enclave as a centre for torturing left-wing dissidents in the 1970s and 1980s.

While under Schaefer's control, most of the commune's residents are believed to have been held there against their will.

A Chilean congressional report has said that Colonia Dignidad - which means Dignity Colony - operated as a "state within a state" during the Pinochet regime, thanks to Schaefer's close ties to the country's ruling elite.He had fled Chile in 1997 and was convicted of sex crimes in absentia. He was found hiding in Argentina in March 2005 and sent back for a fresh trial.

Former members said Schaefer forced children to live separately from their parents, banning contact with the outside world.