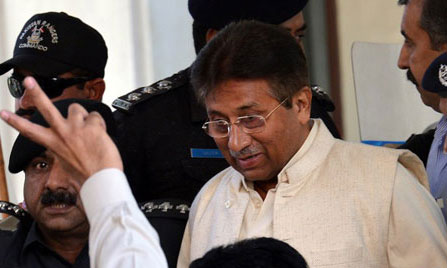 ISLAMABAD: … At least two senior lawyers have been picked up by ‘unknown’ men, who beat them black and blue and dumped the injured men at some distance, ‘The News’ has learnt on good authority. To date, no one among those unknown kidnappers has been traced. Member Punjab Bar Council Mujeeb-ur-Rehman Kiani and senior lawyer Basharatullah Advocate were picked up in this distinctive way used in the past against many others, during last ten days.

Both were beaten severely in the vehicles when they were kidnapped and later one was thrown on Japan Road near Sihala while the other was thrown at a CNG station near Rawat. Senior journalist of The News Umar Cheema was also picked up in a similar fashion by unknown men but was taken to a safe house where he was stripped naked and video-taped and was beaten hard, but till today not a slightest clue of Cheema’s kidnappers has been found by police.

Mujeeb ur Rehman Kiani, a seasoned lawyer and a Member of Punjab Bar Council, was picked up by armed men in two vehicles, a white Toyota 95 model and a green Suzuki Baleno, in the morning from sector I-8, Islamabad last Saturday when he was going to meet his friend, sources close to Kiani told The News.

Kiani’s other friend was accompanying him but was driving his own car and was in the front. The unknown kidnappers intercepted Kiani’s car near Katchnaar Park in sector I-8 and kidnapped him, close associates of Kiani disclosed. He was put on the back seat of Corolla car and one of the kidnappers sat on his legs and started beating him with an iron rod, the sources added. After two hours of thrashing, Kiani was thrown on Japan Road near Sihala from where he was taken to hospital by the people.

Mujeeb ur Rehman Kiani is not the only example; another senior lawyer from Rawalpindi, Basharatullah Advocate was picked up by some unknown men from the Gate number two of Defense Housing Authority on April 21 (Sunday) at 8:30pm. He was also put on the back seat of the vehicle and unknown men beat him black and blue.

Basharatullah Advocate, when contacted confirmed that he was physically assaulted by unknown men after being picked up from the gate of DHA. He maintained that he was thrashed hard for one hour and a half and was latter thrown at Raja CNG Station near Rawat.

He told this scribe that he was deprived of his wallet but the reason for his thrashing and kidnapping was not known. Basharatullah said that he had lodged an FIR in Police Station Sihala but nothing has happened since then.

Lawyers have once against become active after Musharraf is facing the long arm of the law and is appearing in different courts regarding cases registered against him. Such incidents of lawyers being kidnapped and thrashed in cars have raised many eye brows as such things never happened before the homecoming of Musharraf.

The statement of Inspector General of Police Islamabad before the Supreme Court that ‘armed commandos impersonating lawyers took away the former president General (R) Pervez Musharraf from the Islamabad High Court (IHC) premises after the rejection of his bail extension application and the police were unable to stop them’, has also shaken many.

Previous Article
Environmental Racism? Toxic Gowanus Sludge Is Heading For Red Hook, NJ
Next Article
Crimes against Humanity in Guatemala: How the CIA and the Pentagon Supported the Military Dictatorship

Crimes against Humanity in Guatemala: How the CIA and the Pentagon Supported the Military Dictatorship
Apr 30