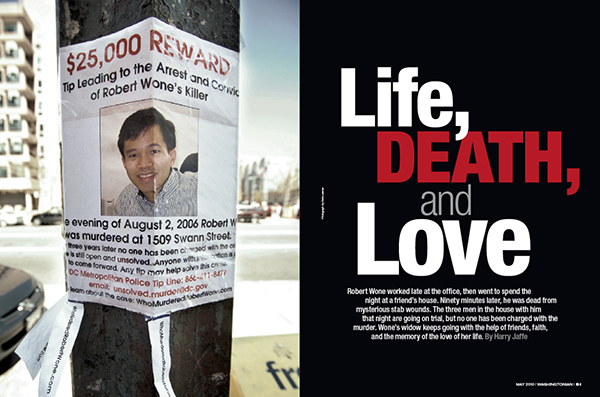 It is possible that no one will ever be charged with the murder of Washington lawyer Robert Wone.

Federal prosecutors realize that, barring a last-minute confession or the discovery of new evidence, Wone's Aug. 2, 2006, slaying will probably go unsolved. Prosecutors believe that one or more people restrained Wone, sexually assaulted him and stabbed him to death after he went to sleep on a pullout couch in a second-floor guest room at 1509 Swann St. NW.

But no one has been charged with killing him.

As early as next week, though, more details of what happened inside the elegant Dupont Circle townhouse where Wone was killed are likely to emerge in court. A trial is set to begin for the three men who lived in the house, where Wone, 32, was staying after a long day's work. Federal prosecutors plan to outline for a jury their theory of how the three men conspired and covered up the slaying. Jury selection is scheduled to begin Wednesday, with opening statements scheduled for next Monday.

Wone's death captured the attention of the public in Washington and across the nation. Web sites have emerged about the crime. It is a horrific case with captivating elements: money, murder and sex.

Joseph R. Price, 39, Victor J. Zaborsky, 44, and Dylan M. Ward, 39, were arrested in 2008 and charged with conspiracy, obstruction of justice and tampering with evidence. Prosecutors are convinced that Wone was sexually assaulted and fatally stabbed after he was physically restrained by either a paralyzing drug or devices similar to those used in sadomasochistic sex. Such a device later was found in the house by police and listed in an affidavit filed in court.

Defense attorneys have argued, as the defendants have said since the night of the killing, that an intruder broke into the townhouse and stabbed Wone, although nothing was taken from the home and there was no sign of a struggle. In a court filing, the lawyers also argued that Wone was never restrained, drugged or sexually assaulted and that authorities "leapt to the conclusion" that because Wone was a heterosexual man in a house with three gay men, "his murder simply must be related to a sexual assault."

Prosecutors think that the three men not only know who killed Wone but also are covering up for the killer or killers. But in the two-plus years since the men's arrest, prosecutors have backed away from trying to prove their theories about the specifics of the killing, including that a sexual assault occurred. Prosecutors also decided against introducing evidence that Wone was drugged with a paralytic toxin. Although medical examiners found seven needle marks on Wone's body, prosecutors later conceded there was not enough of the toxin in Wone's system to conclusively prove a drug was used to incapacitate him.

But in a conspiracy case, prosecutors don't have to prove who killed Wone or even how or why he was killed. Instead, they must prove that the three men -- the only people known to have been in the house with Wone when he was killed -- know who killed him and collaborated in covering up the crime. If convicted, each man faces a maximum of 38 years in prison.

Prosecutors argue that the housemates delayed calling police that night, giving them enough time to clean up the crime scene, dispose of evidence, and devise a story about an intruder coming through their rear door as they slept upstairs.

At a hearing last week, Assistant U.S. Attorney Glenn L. Kirschner characterized Price, a former intellectual-property lawyer at the Arent Fox law firm in Washington, as the lead conspirator. During the hearings, Price usually sits between the other two defendants. Ward, who generally sits to Price's right, has been cold-faced and usually stares straight at the judge, rarely smiling or speaking to either of his roommates.

Zaborsky usually sits to Price's left and often has laughed and talked with Price. Zaborsky was a successful marketing executive who worked for the organization behind the "Got Milk" ad campaign. Ward was a massage student with degrees in international relations and culinary arts.

Price and Zaborsky were domestic partners for several years, according to court records. Then, in 2003, Price brought Ward into the relationship, the records say. "Their three-person relationship formed the bedrock for the conspiracy," Kirschner wrote in the papers.

At last week's hearing, D.C. Superior Court Judge Lynn Leibovitz questioned Kirschner about why the men's relationship is pertinent to the case. "What's so unique about a three-way relationship?" Leibovitz asked.

"Mr. Price has power over both of these individuals. He's manipulated these men," Kirschner said. "Price had the money, the influence and the power in this relationship, and he had the ability to suggest conduct, all of which are relevant in this case."

It's a challenging trial for Kirschner, who leads the homicide unit in the District's U.S. attorney's office. Kirschner wants to avoid characterizing the three suspects' sexual orientation as a factor in Wone's death -- a move that would send any one of the defense attorneys to their feet in objections.

The lawyers argued that neither their clients' sexuality nor their sexual practices should be outlined at length for the jury. If such details become a key factor in the case, the defense might have grounds for appeal.

During their investigation, prosecutors have also uncovered what they think might be another angle, involving Price's younger brother, Michael, 38.

Just months after Wone's killing, Michael Price was charged with burglarizing his brother's house. Kirschner said the men knew that Michael Price was behind the burglary. But they waited a day to report it because the elder Price had encouraged Ward and Zaborsky to withhold the fact that his brother was involved. "They were willing to delay reporting a serious crime because the perpetrator was known to them," Kirschner argued.

Wone and Joseph Price were college buddies at William and Mary. The night he was killed, Wone stayed late at Radio Free Asia, where he was general counsel, to meet his night-shift colleagues. He had arranged to sleep over at the six-bedroom 19th-century townhouse owned by Price and Zaborsky rather than make a late-night Metro trip back to the Oakton home he shared with his wife, Kathy.

Before joining Radio Free Asia, Wone also served as counsel at Covington & Burling, where he worked alongside Eric H. Holder Jr. before the Obama administration tapped Holder as attorney general. The firm now represents the Wone family in a $20 million civil lawsuit against Price, Zaborsky and Ward, alleging that the three concealed evidence and lied to police in a coverup.

The three men were released from jail within days of their 2008 arrests. Price and Zaborsky have since sold the townhouse, and the three now live with a relative of Zaborsky's in McLean.