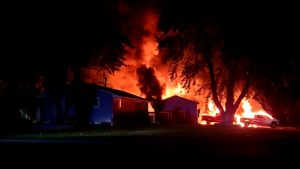 The fire rages in this image provided to WCCO by the family of Denis Molla. family photo/WCCO

CNN — A Minnesota man who claimed Antifa set fire to his camper during the political unrest of 2020 because he had displayed a Trump campaign flag admitted to staging the event and committing insurance fraud, the Justice Department announced Tuesday.

Denis Molla, age 30, of Minneapolis suburb Brooklyn Center was indicted by a federal grand jury in July and pleaded guilty to one count of wire fraud after being accused of defrauding and attempting to defraud an insurance agency and GoFundMe donors of more than $300,000 following the alleged incident, according to court records.

In September 2020, Molla had “falsely reported to law enforcement that someone had lit his camper on fire and that three unknown males were near his home when he heard an explosion,” according to a DOJ news release. The Justice Department said Molla claimed his property was vandalized with graffiti referencing “Biden 2020,” Black Lives Matter, and Antifa.

Molla falsely told CNN affiliate WCCO shortly after the fire that he believed someone set the blaze in response to Trump 2020 flags he had put in his yard. “These kind of stuff should not happen, especially over beliefs of some sort,” he told WCCO.

“Mr. Molla was obviously remorseful during his federal plea hearing today,” Ryan Garry, Molla’s attorney, told CNN via email Tuesday. “It’s easy for the general public to look down on him, without knowing what was going on in his life, and cast immediate judgement. Mr. Molla is a wonderful husband and father who made a mistake that he sincerely regrets. Unlike many others, he has accepted full responsibility for his actions and is sorry for what happened.”

Federal guidelines call for Molla to receive a sentence of up to 51 months, plus a fine and restitution, but prosecutors did not immediately make a sentencing recommendation.

Judge David Doty released Molla on his own recognizance pending a sentencing hearing to be scheduled at a later date.