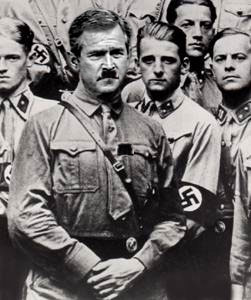 Two prominent Jewish Democratic congressmen stepped up their attacks against the Republican candidates on Friday for their “inadequate moral position”.

New York Representative Steve Israel and Florida Representative Debbie Wasserman-Schultz expressed their concern over the "trivialization of Holocaust" in Republican campaigns and a recent proposal by Minority Whip to separate the aid to Israel from the foreign aid package.

Rep. Israel said he was concerned with "what will happen when the time comes to govern and the Congress is potentially run by the Republican majority – by Nazi reenactors and their friends."

Israel referred to a scandal involving the Ohio Republican candidate Rich Iott, who used to participate in reenactments of World War II battles wearing a Waffen-SS uniform, according to a report by Atlantic Magazine earlier this month.

He also attacked Republicans for an electoral event in Toledo, Ohio on Saturday, in which Minority Leader John Boehner appeared with Iott.

"This is not just an affront to the Jewish community; it reflects particular insensitivity to American veterans who fought against the Nazi uniform."

"Would John Boehner embrace a candidate dressed as an enactor of Osama Bin-Laden? Why does he find it acceptable to embrace candidate who dresses as a German SS officer? This is an insult to memory of Holocaust, to American Jews and the American veterans," said Israel.

"If the Republican leadership is going to pander to the Tea Party by embracing Nazi reenactors, you have to wonder what else they are going to do to consolidate their base. When it comes to supporting foreign aid or important weapons systems for Israel, they will not stand by Israel – they will stand by Tea Party elements”. ...

Asked by “Haaretz” to refer to a claim that liberal U.S. pro-Israel lobby group J-Street was responsible for injecting Israel into the elections discourse, Wasserman-Schultz said: “The Republicans, instead of dealing with trivialization of Holocaust, are trying to point in the other direction. I am not here to talk to defend J-Street, but they are not a partisan organization."

"The bottom line – it’s only Tea Party banners that I saw swastikas on them and references to Nazism and Holocaust. Only on the Republican side you have a candidate who reenacted Nazis with his son. They have a problematic record, and John Boehner has to explain why he gave 7000 dollars of his campaign fund to Richi Iott and to stand with him publicly instead of denouncing his candidacy."

Another demonstrator wore a T-shirt with Hitler-like person stating "I don't agree with you but I am pretty sure you are not Hitler", and yet another made a sign with several portraits of Obama with different mustaches. When asked by "Haaretz" what he meant, the man answered: "I wanted to be funny."