Aryan Nations Should a White Supremacist be able to Serve on the School Board? 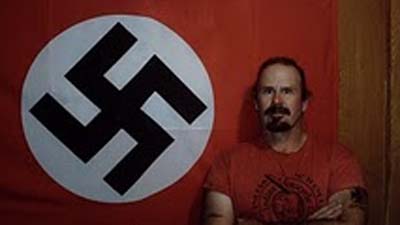 A candidate running for school board in Rialto, Calif., is sparking controversy because of his past--he once served as president of the Aryan Nations.

Although Schruender reportedly admits to passing out invitations to honor Adolf Hitler's birthday and racist fliers around Rialto, a community with a school district that's 75% Latino and 15% black, he says that he won't let his racial beliefs affect school board decisions. He simply wants to turn around a curriculum "dumbed down by the state."

Rialto residents have called for Schruender to be banned from running, but district officials say that his white supremacist ties don't disqualify him from candidacy.

"The decision of who is elected in the Rialto Unified School District - that agenda lies in the hands of the voters in the community," Syeda Jafri, Rialto School District communications director told a Los Angeles television station.

More disturbing than his candidacy for school board is the fact that Schruender is a retired high school teacher. That means he's already had ample opportunity to expose impressionable young minds to his questionable viewpoints and twisted logic on race. And Schruender's claim that he can separate his white supremacist ideology from his role as an educator is nonsense. I don't know what subject or subjects Schruender previously taught--but what narrative would he present when discussing slavery with students or the colonization of the Americas? Would he characterize the decimation of Native Americans as a positive? Would he say the civil rights movement was a setback for America? How about in science class--would he deny that humanity began in Africa? Matters of race turn up too often in education for a white supremacist to avoid discussing them.

Moreover, as a school board member, Schruender would have the power to shape the kinds of materials students are exposed to in class. Are we to believe that Schruender would vote on a multicultural curriculum in which the contributions of people of color and women are highlighted along with those of white males? I very much doubt it, which is why Schruender's suggestion that he won't allow his white supremacist beliefs interfere with his duties on the board is rubbish.

All of us carry varying degrees of biases about different issues. Sometimes we're not aware that we have these biases, and, yet, we still act on them. An avowed white supremacist is someone who's made a shrine of sorts to his bias. He's aware of it in every aspect of his being. He can't simply turn it on and off at will. Hopefully the people of Rialto realize this and refuse to vote a white supremacist into office. All they need for motivation is to revisit the controversial new curriculum adopted by the Texas School board. It's one in which the oppression minorities has endured is downplayed and the contributions they have made in spite of it all are ignored.

In closing, perhaps the city of Rialto needs to rethink who it allows to run for school board. At what point would Schruender be prohibited from candidacy? Would he have to be convicted of committing a hate crime for that to happen? If so, Rialto is not being selective enough about whom it allows to exert influence over the community. In this case, children, the most vulnerable segment of the community are at risk. Black and brown youths have enough obstacles confronting them as it is. They don't need the additional stumbling block of a white supremacist bent on (mis)educating them.