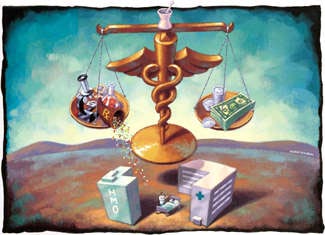 The majority of U.S. medical schools have implemented strong conflict-of-interest policies this year, according to the 2010 American Medical Student Association (AMSA) PharmFree Scorecard, released today. The Scorecard, developed by AMSA and the Pew Prescription Project, finds that 79 of 152 medical schools (52%) now receive a grade of A or B for their policies governing pharmaceutical industry interaction with medical school

The AMSA PharmFree Scorecard (http://www.amsascorecard.org), now in its fourth year, offers a comprehensive national overview, as well as an in-depth, school-by-school analysis in 11 areas, including gifts and meals from industry to doctors, paid promotional speaking for industry, acceptance of free drug samples, interaction with sales representatives and industry-funded education.

Highlights of the survey include:

“As conflict-of-interest policies become part of mainstream medical education, this is an exciting time for future physicians and the health care industry as a whole,” says John Brockman, AMSA national president and fourth year medical student at Case Western Reserve University School of Medicine. “With all of the compelling data about how marketing influences even the best-intentioned physicians, it is gratifying to see that medical schools are taking the necessary steps toward practicing evidence-based medicine, which translates into better patient care.” Case Western increased its grade this year from a ‘D’ to a ‘B’.

AMSA developed the rigorous scorecard methodology with the Pew Prescription Project, which works to promote consumer safety through reforms in the approval, manufacture and marketing of prescription drugs.

“Conflict of interest policies ensure appropriate relationships between caregivers and drug and medical device companies,” said Allan Coukell, director of medical safety for the Pew Health Group, which supports AMSA’s work. “The 2010 Scorecard shows that medical schools are moving toward stronger conflict-of-interest standards and that the Scorecard is an increasingly accepted assessment tool.”

On Wednesday, December 15th at 11 a.m. EST/8 a.m. PST, AMSA will host a virtual news conference to review the results of the 2010 AMSA PharmFree Scorecard: