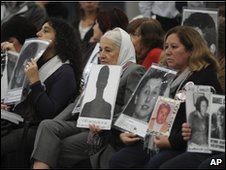 Victims’ groups are campaigning for those responsible to face trial

A former secret service agent in Argentina has been arrested on charges of human rights abuses under military rule between 1976 and 1983.

Miguel Angel Furci was charged with taking part in around 70 kidnappings.

He is also accused of torturing prisoners at a notorious detention centre in Buenos Aires. The prison allegedly housed victims of Condor, a joint operation among South American military dictatorships aimed at suppressing the opposition.

At a court hearing, Mr Furci admitted belonging to the secret service and confirmed the existence of the secret detention centre.

Victims’ groups say up to 300 people were kidnapped and taken to the secret prison, known as Automotores Orletti, after the garage it used to house. dozens of Uruguayans were reportedly held there as part of Operation Condor, which involved the kidnapping, torture and assassination of leftists and dissidents in Argentina, Brazil, Bolivia, Chile, Uruguay and Paraguay.

Mr Furci has already served a seven-year sentence for the kidnapping in 1976 of the daughter of a Uruguayan couple, who disappeared after being taken to the detention centre.