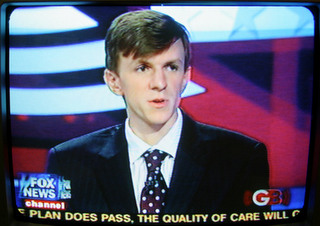 The most prominent activist, James O'Keefe, was sentenced to three years probation, 100 hours of community service and fined a $1,500 fine. The 25-year-old is known for wearing a pimp costume in a video that embarrassed ACORN.

Magistrate Daniel Knowles III sentenced the three others to two years probation, 75 hours of community service and fined them $1,500.

The FBI has said O'Keefe used his cell phone to try to capture video of two men who posed as telephone repairmen and asked to see the phones. The fourth allegedly waited outside in a car with a listening device.