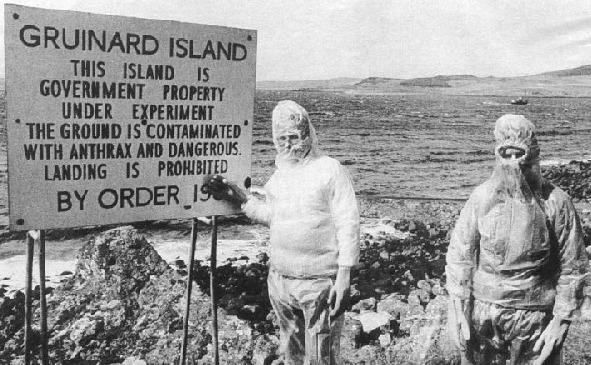 British scientists experimented with ways of spreading foot-and-mouth disease, and lethal infections such as dysentery, cholera and typhoid in secret biological warfare trials during the second world war. An extensive list of the contagious agents and plagues that could be turned into weapons of mass destruction is revealed in files from a War Cabinet committee released to the National Archives.

The government was known to have produced 5m anthrax-filled cakes to infect cattle in Germany during the war, but the latest documents show research was carried out into a far larger variety of diseases, mostly in Porton Down, near Salisbury, and Pirbright in Surrey.

Experts reported to the War Cabinet’s Porton experiments sub-committee, which acknowledged that “bacteriological warfare” was outlawed by the 1925 Geneva protocol. The minutes, only now released, are labelled “secret” and “to be kept under lock and key”. One session on “Toxin X” – thought to be botulinum – was so sensitive the minute records: “Not circulated.”

An interim report in January 1941 said: “The diseases considered most likely to be effective in bacteriological warfare are:

Biological warfare was not thought “likely to achieve a decisive effect, but might cause grave embarrassment at a critical stage in the conflict,” the report said. Preparation was required both to defend against such attacks by “the enemy” and as a “means of retaliation”.

The study queried whether retaliation should be limited only to diseases or infections “first used” by the Nazis. “… It is assumed that retaliation would be made simultaneously and on a maximum scale with all the means at our disposal”.

Human diseases, it was said, could be introduced into “enemy territory only by saboteurs” – for example at “restaurant food counters”. That would make it “very difficult to achieve on a scale sufficient to produce serious effects”.

Attempts to infect reservoirs from the air would “necessitate large quantities of material and would probably be defeated by the chlorination of water supplies”, it said. Some animal diseases – “anthrax, foot-and-mouth and rinderpest”, the report added, “could be distributed [by spraying] on pasture land from aircraft.”

By February 1941 work had been carried out to fit “streamlined steel containers” to the bomb bays of Wellington and Blenheim bombers.

Estimates of the time needed to prepare “retaliatory measures” in each disease were set out. Only small quantities of typhoid, dysentery and cholera would be required, it advised, and experiments were being made into “methods for use”.

Infective anthrax spores could be produced in large numbers at a few days’ notice, three strains of foot-and-mouth virus were available but a three-week “reactivation” period was needed. Supplies of rinderpest – or cattle plague – had to be obtained from Africa and a new isolation station built. Large batches of glanders – a bacterial infection – could be made up in two weeks. Experiments were being conducted on swine fever.

The sub-committee recommended that research into human and animal diseases continue. Scientists at Pirbright found their cows were unco-operative with attempts to poison them with cattle feed cakes containing infections or ground glass dropped from the air. “Observations have shown that cattle are rather suspicious of any new type of food.” The virulence of stored foot-and-mouth disease also tended to decline rapidly, it was discovered. Experiments on “keeping the properties of the virus when filled into cakes” were ordered. Pirbright was the government research station whose leaking drains in 2007 triggered a foot-and-mouth outbreak across Surrey.

By November 1941 anthrax-filled cakes were emerging as the favoured, practical means for “taking offensive action”.

The committee justified the research on the basis of defensive necessity. “This sub-committee was set up in 1936 because of reports that Germany was exploring the field,” one minute recorded.

“Work started in Porton Down in 1940, directed almost entirely to the exploration of offensive possibilities in order to supply evidence on which defensive action can be taken and on which means of retaliation could be based if authorised.”

Dr Brian Balmer, of University College London, who is the author of Britain and Biological Warfare: Expert Advice and Science Policy 1930-65, said the newly released material provided fresh insights into the UK’s wartime biological programme. “We have not seen such a detailed list before.” He added: “The process [at Porton Down] most likely involved starting with a list of likely sources for infections and then finding that some are difficult to aerosolise or are unstable or are otherwise unsuitable for weaponisation.”

Neither side used biological weapons in the war.

Lawmaker Objects to Moving Disease Lab to Kansas
May 26