Argentina: 1) The Man who Photographed the Disappeared at the ESMA Torture Camp, and 2) Made Passports for P2 Grandmaster Licio Gelli - The Constantine Report
0 SHARES

American Terrorism » Argentina: 1) The Man who Photographed the Disappeared at the ESMA Torture Camp, and 2) Made Passports for P2 Grandmaster Licio Gelli

Argentina: 1) The Man who Photographed the Disappeared at the ESMA Torture Camp, and 2) Made Passports for P2 Grandmaster Licio Gelli 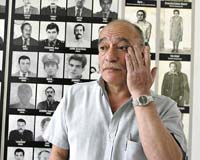 "Disappeared" survivor Victor Basterra - Two stories about Basterra, a survivor of the torture and extermination center at ESMA, the Navy School in Buenos Aires, who 1) photographed political victims, the "Disappeared," in theArgentine prison, and 2) Basterra's testimony concerning the fabrication of false ID documents for P2 leader Licio Gelli:

A survivor of the ESMA torture camp, Víctor Basterra received an award for valour today in Buenos Aires - and well-deserved it is too. Basterra was imprisoned in the ESMA in 1979 and, like some other skilled detainees, put to work. In his case, he was forced to photograph the military personnel working there, for ID cards and the like.

Some trusted prisoners were occasionally allowed out of the detention centres without being granted their true freedom - and if you wonder why they would ever return, you can only imagine what would have happened to their families and friends if they had not. Basterra was one of these, and he secretly smuggled out the photos he had taken and other negatives of the prisoners themselves (it is often reported that he took those images too, but he testifies otherwise - a military photographer photographed the disappeared and Basterra made copies). These photographs are essential evidence of who, both victim and perpetrator, was incontrovertibly in the ESMA during the dictatorship and were used during the Trial of the Juntas.

There is not a shadow of a doubt that Basterra was risking his life in removing evidence from the Navy's major detention centre. Moreover, this brave man continues to struggle for justice by talking about what happened to him, taking tour groups around the ESMA, and testifying in legal proceedings.

The photographs of the Navy personnel can be seen here.

The photographs of the disappeared also feature in the book Memoria en construccion edited by Marcelo Brodsky. Brodsky's disappeared brother Fernando is on the poster you can see in the small image above.

For background on Basterra and the ESMA, see also this article from the Washington Post: Torture Center to Bear Witness

2) Former Lieutenant Urien: "I was trained to torture, but I refused" 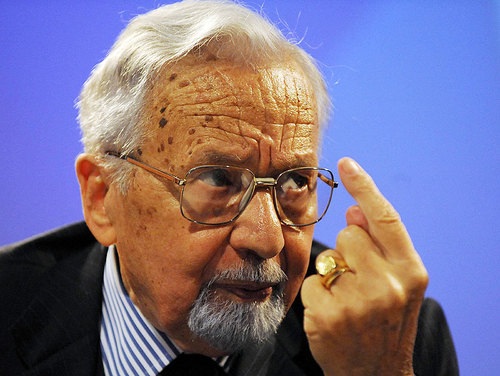 "I will die a fascist" - P2 grandmaster Licio Gelli

A forger created passports for friends of the regime, beginning with Licio Gelli. The story of Victor Basterra, prisoner of the Argentine military from 1979 to 1983, will be the focus in the court of Assizes tomorrow. On trial are ex-Admiral Emilio Eduardo Massera, former head of the Esma and last to be tried for the death of three citizens of Italian origin, Angela Maria Aieta, John and Susanna Pegoraro.

Today, Basterra told the press at the court of Rome that when he was detained "in slavery." he was forced by some officers from Argentina - including Pedro Horacio Estrada, found dead in 1998 - to prepare four false passports for Gelli.

"They were in the police station, took the identity of people with age similar to what we needed, and it was nothing to build their passports. I recognized Gelli from the fps, but I've never seen him."

Basterra was kept at ESMA, the Navy School of Buenos Aires, a center of torture and extermination of political opposition.  He was forced to take snapshots of military personnel. The photographs were then used to prepare false documents for illegal actions in the coup. Basterra was put to work at forgery.

Gelli, when he was arrested in Switzerland, had one of the passports with him.

In the last days of his detention, Basterra had enjoyed a lowering of security measures. It was then that he managed to bring out copies of the photos he had shot - photos that were publicized. In addition to his shots, Basterra was even able to bring out a dozen photos of prisoners such as Graciela Alberti, who has not surfaced.

Today at the hearing,  plaintiff lawyers, attorneys and Giancarlo Màniga Marcello Gentili have filed a document found in the archive of the Navy School in Buenos Aires that  identified 81 military personnel as torturers.

At the hearing, the cofesson of a former Argentine official, Julio Urien, was heard.

"I had been trained to torture, as inthe movie The Battle of Algiers. But then when I refused, I was transferred to ESMA along with two hundred soldiers."

Then the former lieutenant said: "I was held in Hall's death. Many of my friends are dead. I hope that the process here in Italy can serve so things do not happen again." Urien, after his return to freedom, became a successful manager, performing tasks of great responsibility.

See book, In God’s Name, The Murder of Pope John Paul I by David Yallop. He died of a “heart attack”. 400+ poisons induce heart failure.