A man alleged to be one of the infamous torturers of the Franco regime, and known as Billy the Kid for his habit of spinning a gun around his finger as he beat his victims, has been living a peaceful, undisturbed, life in the heart of Madrid, even flying out to run the New York marathon on numerous occasions, it has emerged.

The name of Antonio González Pacheco stands out as a symbol of the brutality of General Francisco Franco's dictatorship. He is accused of multiple acts of torture against members of the republican opposition, and is reputed to have been especially sadistic, telling his victims how much he enjoyed beating them.

His name came to the fore last month when an Argentinian judge, María Romilda Servini de Cubría, called for his extradition – along with three other men accused of carrying out Franco's orders – after receiving a petition from his alleged victims' lawyers in Spain. Two of the men are in fact now dead, but González Pacheco and Jesús Muñecas Aguilar, an ex-police officer, could be summoned over the extradition request.

"Following Franco's death in 1975, González Pacheco had joined the police's anti-terrorism unit. He helped run the 'dirty war' against the Basque separatist group, Eta. He moved later to a private security firm, where he still works. ... "

On Sunday, El Mundo newspaper published a photograph of González Pacheco that shocked many of his alleged victims. It shows him running the Madrid half-marathon in 2010, wearing a red top, black shorts – the same colours as the flag of Spain's fascist Falange party – and a black RUN NYC baseball cap. He finished in 2hrs 7mins 7secs, impressive for a man who celebrated his 67th birthday last weekend. 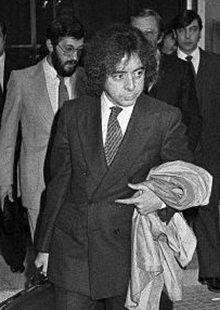 González Pacheco'a long hair may be gone, but the picture marks the first time he has been seen since shortly after the end of the dictatorship more than 30 years ago.

Following Franco's death in 1975, González Pacheco had joined the police's anti-terrorism unit. He helped run the "dirty war" against the Basque separatist group, Eta. He moved later to a private security firm, where he still works. He regularly runs marathons in Spain, Budapest and New York, and is said to pound the streets almost every day, but beyond that little is known of his private life.

When the Guardian visited González Pacheco's flat in an upmarket neighbourhood in the shadows of Real Madrid's Santiago Bernabéu stadium, the doorman denied all knowledge of him: "I don't know this man. I won't say anything about this man."

When told he was alleged to be one of the most infamous torturers of the Franco regime, and a man wanted by Interpol, he said: "I don't know anything about that."

Attempts to speak to some of his neighbours were unsuccessful, and he is understood to have since gone into hiding.

One of González Pacheco's alleged victims, 65-year-old Felisa Echegoyen, spoke of her feelings about seeing his face again: "I'm not sure I would want to see him in person, I have to say. Not because I am scared of him, not at my age, but because he represents the worst period of my life, and the worst period in the history of this country."

Echegoyen alleges that in 1974, when she was 26 years old, González Pacheco came to her apartment, with four other policemen, knocked the door down, stuffed a handkerchief in her mouth as she screamed in fear, and repeatedly beat her.

Echegoyen said she was then taken to a police station, where she was held for three days, accused of "illegal association" with the opposition, and of distributing Communist propaganda. She was not allowed to sleep, was regularly beaten, and interrogated, until she became so hysterical she could barely move.

Of González Pacheco, she said: "He wasn't that big, but he was the most violent." She said on the second or third day she was forced to take a tablet, apparently to calm her down as she became increasingly anxious, and was eventually fined and sentenced to just over two years in prison, most of which she did not serve.

"My case was nowhere near the worst – one friend of mine was left with a leg the colour of an aubergine, and many others were horrifically beaten," she said.

International pressure is now growing on Spain to address the crimes committed under Franco's near 40-year dictatorship, and a UN delegation last week called on the government to open a full public investigation.

As with Augusto Pinochet – the former Chilean dictator whose arrest was ordered by the Spanish judge Baltasar Garzón in 1998 – warrants were issued for González Pacheco and the others under an international law allowing human rights abuses to be investigated and tried elsewhere if the country in which they occurred did not investigate.

In this case the alleged victims went to Argentina after they failed to gain redress in Spain, where an amnesty law was passed in 1977, during the transition to democracy following Franco's death, which prevented trials for any crimes committed before 1976.

This, according to many support groups, has left the country permanently damaged, and incapable of moving on from its bloody past.

There are believed to be perhaps as many as 114,000 bodies buried across Spain; and 30,000 children were taken from their parents, many of whom have never been found. Carlos Slepoy, a lawyer representing the alleged victims, said: "Spain runs the risk of becoming a refuge for criminals if it refuses to investigate these crimes here, and does not allow Argentina to."

Slepoy pointed out that former Nazi war criminals were hunted around the world, and both Argentina and Chile had either abolished or amended their amnesty laws so as to punish those who committed crimes under dictatorships. "In a modern country like Spain, it's unthinkable that they cannot do this, and we hope international pressure will convince the government to act."

A Spanish ministry of justice spokesperson said that as soon as Argentina sent Spain the relevant case documents, these would "be studied, as is the case in all requests for extradition". But many believe Spain has no intention of handing over the men to Argentina, for fear of opening the floodgates to other cases. Prosecutors have said they see no need to detain the men.

As if to show the mixed feelings about crimes committed under the dictatorship, El Mundo, the newspaper that published the story about him, ran an editorial on Monday saying he should not be charged, and that it would be "better not to resuscitate the demons of our past".

But others disagree. "I just want to see him stand trial for the crimes he committed," said Echegoyen, "and for the truth of what happened in this country to finally be told. In order to move forward, we need to come to terms with the past."

Whatever happens next, with an international arrest warrant out for him, one thing is for sure: González Pacheco will not be running any marathons abroad anytime soon.

Raising the Issue of Fascism in Spain