Necessary background: "American Heart of Darkness" (Re the unconscionable framing of Jeffrey MacDonald for the Fatal Visions murders, an ongoing federal campaign to cover up the importation of heroin in the body-bags of US military personnel killed in Vietnam.)

In court documents filed late last month, U.S. attorneys argued that MacDonald had ample opportunity to present the evidence during or before the hearing in Wilmington last year.

MacDonald, 69, is serving three life sentences for the February 1970 stabbing deaths of his pregnant wife, Colette, and daughters Kimberley, 5, and Kristen, 2, in their home on Fort Bragg.

He contends that he and his family were the victims of a home invasion, but investigators say MacDonald killed his family and made up that story.

MacDonald said he woke to find three men and a woman in his home. He said he fought with two of the men but was knocked unconscious and stabbed once.

His wife had 37 stab wounds, some from an ice pick, some from a knife, and was beaten. She had two broken arms and a fractured skull. 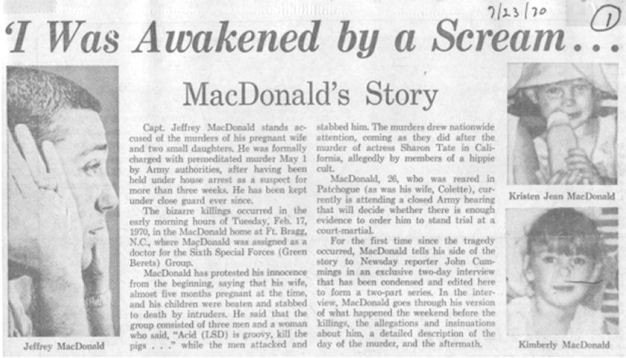 The latest efforts began more than seven years ago and culminated in the hearing last fall.

The judge overseeing the hearing has yet to rule on the matter, and no date has been set for such a ruling to take place.

"MacDonald had six and a half years to marshal evidence to support the claims he filed in early 2006," the officials said. "The parties had many months to prepare for the evidentiary hearing, which was delayed several times at MacDonald's request, and the parties prepared a lengthy pre-hearing order, identifying exhibits for the hearing."

At issue are seven exhibits introduced by MacDonald's lawyers in August. They include three affidavits from witnesses who either testified at the September 2012 hearing or who were on the witness list but were not called, a magazine article written by a former MacDonald lawyer, and excerpts from other publications about the case.

MacDonald's lawyers have argued that DNA test results on genetic material found in the home and not linked to MacDonald or any victim, and the alleged confession of a now-deceased drug abuser, are cause to overturn his convictions.

In August, they argued that the evidence, "viewed dispassionately," shows abundant reasonable doubt. They presented evidence that a former U.S. marshal, who is deceased, said he heard the woman admit to being in the home and heard a prosecutor threaten to charge her if she told jurors.

Prosecutors have called both sets of evidence unreliable, questioning the relevancy of the DNA results and the credibility of the marshal's and the woman's claims.