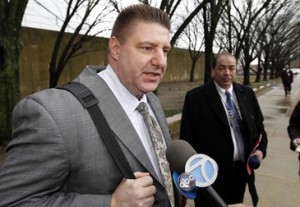 In a rare, on-the-record conversation about the NYPD, the FBI official in charge of Newark chastised the NYPD for undermining the FBI’s counterterrorism efforts. Speaking to reporters at roundtable interview yesterday, Special Agent Michael B. Ward said the NYPD’s surveillance efforts in Newark were actually counterproductive, and were sowing mistrust and resentment among the city’s Muslims. This, in turn, makes it harder for FBI to glean effective intelligence from Muslims in the community, according to Ward.

“When people pull back cooperation, it creates additional risks, it creates blind spots,” Ward told reporters. “It hinders our ability to have our finger on the pulse of what’s going on around the state, and thus it causes problems and makes the job of the Joint Terrorism Task Force much, much harder. People are concerned that they are being followed. People are concerned that they can’t trust law enforcement, and it’s having a negative impact.”

The press conference was called in response to a series of Associated Press articles that have shed light on the NYPD’s extensive spying on Muslims in Newark and elsewhere. Ward argued that the NYPD’s blanket surveillance has had a chilling effect. “That’s a problem; these are people that are our friends,” Ward said. “These are people that have embraced law enforcement, embraced the mission that we have in counter-terrorism, and you can see that the relationships are strained.”

Ward also cited examples of the agency’s cooperation with the NYPD, but after Ray Kelly announced the arrest of 27-year-old terror suspect Jose Pimentel, FBI sources revealed that they had declined to go after Pimentel because he did not seem like a credible threat. It’s unclear if Ward had approval from higher-ups for the press conference. Soon after it concluded, FBI Director Robert S. Mueller issued a statement praising the NYPD for doing “a remarkable job in protecting New York.”

Also praising the NYPD? NY Post columnist Andrea Peyser, who name-checked Snooki while thrashing the NY Times today for criticizing the NYPD’s surveillance program. “The Times called on the feds to look into the surveillance, with the intent of making Kelly back off,” Peyser opined. “Never mind that anyone with an Internet connection and a car could easily perform the kind of surveillance the Times deems ‘constitutionally suspect.’ If Kelly gives in, people will die… I’d like to sleep at night knowing we’re in safe hands. Ray Kelly, do not give in.”

Of course, no one’s asking for Kelly to “give in” and hand terrorists the keys to 1 Police Plaza, as much as his allies would like to frame the debate that way. The criticism has to do with how the NYPD conducts its counterterrorism program—is it legal, and is it effective. Asked about the backlash to his criticism of the NYPD’s operations in Newark, NJ Governor Chris Christie told reporters yesterday, “I think what (Ward’s) getting at really is this secrecy, it’s this unwillingness to work with New Jersey law enforcement. I don’t have any problem with the NYPD coming to New Jersey. But if you’re going to come let New Jersey law enforcement know about it so we can work effectively together. Pick up the phone and call and let us know.”