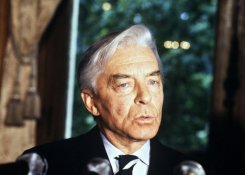 Austrian conductor Herbert von Karajan, a major figure in 20th-century classical music pictured here on June 14, 1982, was a bigger fan of the Nazis than he made out, according to a historian who has unearthed previously unseen documents.

AFP - Austrian conductor Herbert von Karajan, a major figure in 20th-century classical music, was a bigger fan of the Nazis than he made out, according to a historian who has unearthed previously unseen documents.

"It is time to probe scientifically the claims that Karajan constructed and cobbled together... and which in the end he really believed himself," said Oliver Rathkolb from Vienna University.

Presenting his findings at a seminar on Friday, Rathkolb cited anti-Semitic comments from letters written by Karajan (1908-1989) in his youth and said that at school the legendary maestro had belonged to an ultra-nationalist, pan-German youth group in Salzburg.

Rathkolb also questioned Karajan's claims after World War II that he only joined the Nazi party in order to be able to pursue his musical career, citing his application to join in April 1933, five years before the annexation of Austria by Nazi Germany.

The historian also said that Karajan's 1942 marriage to the "quarter-Jewish" Anita Guetermann, which the composer cited in his defence after 1945, "was more useful to him than harmful" in the Nazi period.

Her industrialist father divorced his Jewish wife and enjoyed close commercial ties with the Nazis, and propaganda chief Joseph Goebbels intervened personally to stop a probe into Anita Guetermann's Jewish origins in order to clear the way for her marriage to Karajan, Rathkolb said.

Karajan was chief conductor of the Berlin Philharmonic and artistic director at both the Vienna State Opera and the Gesellschaft der Musikfreunde in Vienna.