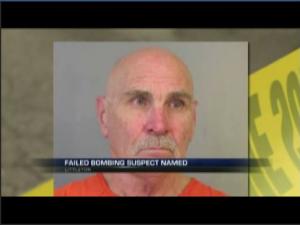 John earlier reported on a bizarre case involving an attempted bombing of a mall in Littleton, Colorado, on the anniversary of the Columbine High School massacre in that town last Wednesday.

It seems they’re catching up to the would-be bomber — or at least, they’ve identified him:

Authorities found a small fire, two propane tanks and a crude pipe bomb on Wednesday, the anniversary of the Columbine High School massacre, which prompted mass evacuations and put a community on edge.

Records from the Federal Bureau of Prisons show Moore was released from custody April 13 and remained on supervised parole at the time of the alleged bomb attempt.

Court records show he robbed a West Virginia bank of $2,546, assaulted a bank employee and used a deadly weapon in the course of the 2005 robbery.

It also appears that he has quite a background — including both a tax-resistance case and at least one very interesting tattoo:

Moore’s criminal record in Colorado dates back to 1984 with a drug possession charge. He served six months in state prison on a felony burglary charge out of Arapahoe County in 2004.

In 2010, the state filed a distraint warrant in Jefferson County in an attempt to collect $2,819 in taxes from Moore.

Photos released by the FBI Denver Joint Terrorism Task Force and the Jefferson County Sheriff’s Office show Moore with tattoos of a heart and dagger, a rose-like flower and a Viking face on a bicep and forearms.

The Viking tattoo is particularly important, because it is a powerful indicator that Moore — most likely while in prison — was exposed to white-supremacist beliefs and likely identified with neo-Nazi or other white-power gangs in prison. That’s because “Odinist” and Norse mythology have become favorite religions for the white-power set for several decades now, and ornate Viking tattoos of this kind are particularly associated with these beliefs.

Not all Viking tattoos belong to white supremacists — but they are so common among them that they are a strong indicator, at the very least. Given that we’re talking about someone with an extensive prison background, the chances that it is NOT a white supremacist become vanishingly small.

It’s looking increasingly likely that, just as we saw in Spokane, this bombing attempt gone bad was carried out by a white-supremacist fanatic intent on an act of domestic terrorism. But of course, it will once again be handled by our mainstream press as just another “isolated” incident. In the meantime, it’s looking like our list has now grown to 25.