Musa Kusa: The CIA Spy Who Came in from the Desert - The Constantine Report
0 SHARES

War » Nuclear weapons » Musa Kusa: The CIA Spy Who Came in from the Desert

Musa Kusa: The CIA Spy Who Came in from the Desert

" ... Rarely has a defector received such red-carpet treatment. I can only assume it is for services rendered to his U.S. and British masters over the years. ... " 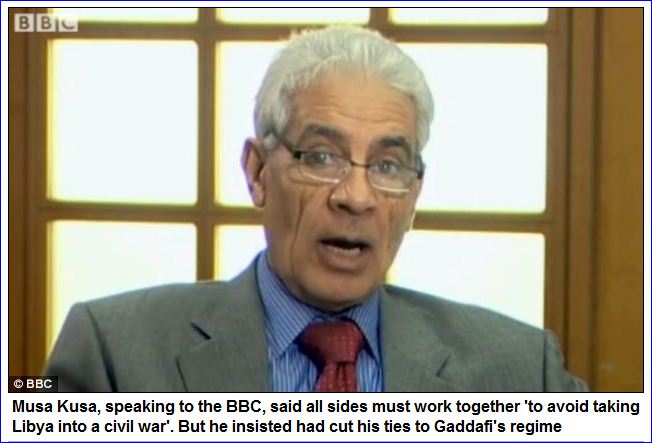 It’s been reported in the British media that he was a double agent who worked for MI-6 and the CIA, recruited in 2001 during a visit to London. That seems plausible, as Kusa has been documented as leading a Libyan diplomatic negotiating team in London in October 2001, in a 2007 book by Douglas Frantz and Catherine Collins. It could also explain why U.K. and U.S. authorities lifted the financial and travel sanctions against him without further ado.

But a U.S. Treasury Department spokesman, announcing the decision on the unfreezing of assets, was still playing along with the scenario that Kusa was a genuine defector who after more than three decades of loyal service to Moammar Gadhafi decided to throw in the towel. “Kusa's defection and the subsequent lifting of sanctions against him should encourage others within the Libyan government to make similar decisions to abandon the Gadhafi regime,” said David Cohen, the acting Treasury undersecretary for terrorism and financial intelligence.

It’s revealing to look at Kusa’s role in the surrender of Libya’s weapons of mass destruction to the U.S. and U.K. in 2003. Many people think that Gadhafi voluntarily gave up his WMDs, fearful of being the next target of George W. Bush after Saddam Hussein. But in fact, the Gadhafi regime only gave them up after being caught red-handed by U.K. and U.S. intelligence. There’s a wonderful account in Frantz and Collins’s book, The Nuclear Jihadist (which is actually about how Pakistani scientist A.Q. Khan set up his nuclear supermarket) on how a CIA agent ends up saying to Gadhafi, following the interception of a shipload of components for centrifuges, “You are the drowning man, and I am the lifeguard.” Kusa was the intermediary who set up the fateful meeting with Gadhafi in which “he agreed to be saved.”

Kusa — a former Michigan State University student — had previously negotiated with the U.S. and Britain over the Lockerbie settlement, and on keeping al Qaeda at bay. Yet this is the same guy who is accused of involvement not only in the Lockerbie bombing, but of bringing down a French passenger jet over Niger in 1989 and shipping arms to the Irish Republican Army. He is a former ambassador to London who might be implicated in the murder of a British policewoman in 1984, and was expelled by Britain in 1980 after advocating the assassination of Libyan dissidents abroad. He is hated by the Libyan opposition, who were wary of meeting him when he showed up for talks in Qatar last week, two weeks after his sudden defection from Libya.

So who is Musa Kusa? I think he still has some explaining to do. Rarely has a defector received such red-carpet treatment. I can only assume it is for services rendered to his U.S. and British masters over the years.