William Hyland, the Man Who Named the CIA, is Dead

William G. Hyland, who helped shape United States foreign policy, particularly toward the Soviet Union, as a top-level bureaucrat and then became editor of the influential journal Foreign Affairs, died on March 25 in Fairfax, Va. He was 79.

The cause was an aortic aneurysm, his son James said.

Mr. Hyland, who lived in Vienna, Va., held high posts in the Central Intelligence Agency, the State Department and the White House. President Gerald R. Ford named him to a top-level panel to coordinate the intelligence community, and President Jimmy Carter chose him to represent the National Security Council on an interagency committee to guide relations with the Soviet Union.

In 1975, when the House Intelligence Committee accused Secretary of State Henry A. Kissinger of withholding documents and moved toward holding him in contempt of Congress, Mr. Hyland defended him. Mr. Hyland brokered a compromise through which he personally briefed the committee on the contents of documents, but did not show them to representatives.

In a column in The New York Times in 1977, William Safire characterized Mr. Hyland as perhaps the most experienced presidential aide in determining what sensitive information goes into the Oval Office.

In the 1980s and ’90s, as editor of Foreign Affairs, published by the Council on Foreign Affairs, Mr. Hyland played a part in furthering the journal’s role in framing the establishment’s discussion of international affairs. Mr. Hyland guided its coverage of the fall of the Soviet Union. In an article in 1991-2, he pointed out that on the 50th anniversary of Congress’s declaration of war against Japan, the leaders of three former Soviet republics gathered in Brest to proclaim the end of the Soviet Union.

For the first time in a half-century, Mr. Hyland emphasized, the United States was not waging a hot or cold war. This meant, he wrote, that the country was “freed from the threats and fears that had driven its foreign and domestic policies for half a century.”

In an interview with The Washington Post in 1991, Mr. Hyland urged the United States to take advantage of the new opportunities by tackling domestic problems and “start selectively disengaging abroad to save resources.”

He named the C.I.A. and other national security agencies to which he had belonged, and suggested that they “may now be trying to perpetuate something from the past, to give urgency to (international) issues that are no longer all that urgent.”

William George Hyland was born on Jan. 18, 1929, in Kansas City, Mo., and raised there and in Wisconsin. He graduated from Washington University in St. Louis as a history major and earned a master’s degree in history from the University of Kansas City. Then a private college, it became part of the University of Missouri system in 1963.

Mr. Hyland served in the Army’s Second Armored Division from 1950 to 1953 and was stationed in Germany.

In 1954, he joined the C.I.A.; one of his early jobs was desk officer in Berlin. He rose to head of the Soviet desk in the Office of National Estimates, which combines the analyses of federal intelligence agencies to produce authoritative reports. It was Mr. Hyland’s responsibility to estimate the Soviet threat to the United States.

He wrote his first book while working for the C.I.A., “The Fall of Khrushchev” (1968), an analysis of the Kremlin politics that led to that Soviet leader’s downfall.

In 1969, Mr. Hyland joined the National Security Council, on which he worked closely with Mr. Kissinger on arms control, presidential summits and other matters. In 1973, after Mr. Kissinger became secretary of state, Mr. Hyland became head of the Bureau of Intelligence and Research at the State Department. In 1975, he returned to the security council to be deputy to Brent Scowcroft, President Ford’s national security adviser.

Mr. Hyland left government in 1977 to work at the Center for Strategic and International Studies, which at the time was affiliated with Georgetown University, and later, the Carnegie Endowment for International Peace. In 1983, he accepted the offer to edit Foreign Affairs, succeeding William P. Bundy, a former assistant secretary of defense and state.

In addition to his son James, who lives in Vienna, Va., Mr. Hyland is survived by his wife of 53 years, the former Evelyn Sapp; another son, William Jr. of Palm Harbor, Fla.; and four grandchildren.

Mr. Hyland, who played the trumpet as a youth, wrote three books about jazz, big bands and Broadway musicals. The first, “The Song Is Ended: Songwriters and American Music, 1900-1950” (1995), focused on musical legends like Berlin, Gershwin and Porter.

Herbert Swope Jr., in a review in The Palm Beach Post, applauded the result. He wrote, “Returning to his first love — popular music — Hyland treats his subject with the care and seriousness the editor of Foreign Affairs would be expected to give.” 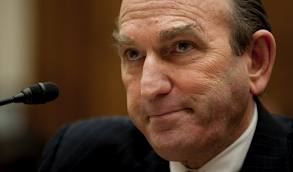