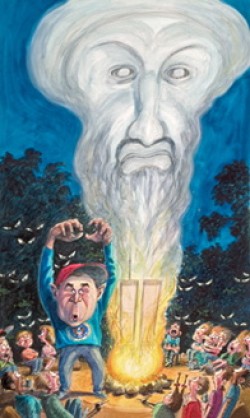 " ... Demetrius Crocker is a white Tennesseean. Far from merely claiming to hate the government, Crocker wanted to kill every black person he could find ... "
-
Phony Terror and Black America
by Margaret Kimberley

The Bush men's scheme to conquer the world, starting with Iraq, is dead in the water, having been thwarted by the Iraqi resistance. However, the domestic component of the offensive continues to roll up a body count of hapless "terror" suspects who, in fact, have hatched no real "plots" nor have any capability of carrying out actual attacks. Entrapment and sting operations, utilizing criminals as agent provocateurs, are designed to make the U.S. a "State of Fear." True to historical form, the feds ensnare the "usual suspects" - Blacks and Muslims - while leaving Timothy McVeigh's white conspiratorial brethren free to pursue their murderous missions.

Ever since September 11, 2001 Americans have had a legitimate fear of terrorist attacks, yet the government has done little to ease those fears. Color coded terror alerts were announced on a consistently convenient basis. They were meant to make the public more supportive of war, or fearful of changing political horses midstream. Miraculously, none have been issued since the November 2004 presidential election.

Despite the Bush pledge to catch bin Laden "dead or alive," Osama is still at large and there have been no terror convictions of any substance. There has been plenty of publicity about dubious cases that don't pass the smell test. Those cases are always built around the entrapment of Muslims, immigrants and African-Americans.

The most recent case to make headlines involved Guyanese and Trinidadian immigrants. They followed through on an informant-inspired plan to blow up JFK airport in New York. The informant was a convicted drug dealer looking at the possibility of a life sentence. It is an understatement to say that he had an incentive to create a terror plot. Criminals weaseling out of their own legal troubles are at the heart of many of these cases.

The "plot" ringleader, Russell deFreitas, was unemployed at the time of his arrest, and had been homeless on more than one occasion. He had no money, weapons, explosives or plot that could possibly have been carried out.

At least there was a plot, however flimsy, to speak of. Other well publicized cases consisted only of tape recorded loyalty oaths supposedly made to al-Qaeda. Such was the case of Tarik Shah, an African-American convert to Islam and a renowned jazz musician. He and a friend, Dr. Rafiq Sabir, were recorded taking an oath to fight for Islam. Neither man had guns, explosives or a plan to harm anyone. Yet they were charged with supplying material support to al-Qaeda. Shah pled guilty and was sentenced to 15 years in jail. Sabir took his chances with a not guilty plea, was convicted, and may face a maximum sentence of 30 years in jail.

Shah and Sabir are not alone in being victimized by government plots to create phony terror attacks. The FBI modus operandi is clear: use criminals to create new ones. All of the suspects in these cases were vulnerable individuals. Vulnerable because they belong to groups of people who are automatically suspect, black Americans, immigrants, and Muslims.

The members of the Seas of David group in Miami aren't even Muslims. They were a group of Haitian immigrants and local activists who practiced a religion that blended both Christianity and Islam. They were accused of plotting to blow up the Sears Tower in Chicago. None had the means to do so.

In the much hyped pizza delivery plot in New Jersey, one of the suspects called police to report that an individual had "pressured him to acquire maps of Fort Dix." The alleged y terrorists were caught after they filmed themselves firing guns and then brought the DVD to a local Circuit City in order to have it copied. It is difficult to imagine Mohammed Atta being so clumsy.

Demetrius Crocker is a white Tennesseean. Far from merely claiming to hate the government, Crocker wanted to kill every black person he could find, members of Congress, and ordinary citizens. Crocker was an admirer of Timothy McVeigh and a long time member of neo-Nazi and white supremacist groups. Crocker channeled his idol Adolf Hitler by making his own canisters of zyklon-b gas.

Crocker was captured the old fashioned, pre-Bush era way. He bragged about his plot to commit mass murder and an investigation ensued. His conviction isn't tainted by the involvement of self-interested informants. Crocker is one of the usual suspects, a white supremacist with a long standing commitment to violence.

Muslims should probably not mention hating America or Israel to a new friend. That friend may need to create a terrorist to keep himself out of jail. Also, stay clear of taking oaths in Arabic. The next oath you take may be in a court room. It doesn't matter if you are charged with crimes instigated by others. Bush needs notches on his gun. He didn't get Osama, dead or alive. Someone else has to take the fall.

Margaret Kimberley's Freedom Rider column appears weekly in BAR. Ms. Kimberley lives in New York City, and can be reached via e-Mail at Margaret.Kimberley(at)BlackAgandaReport.Com. Ms. Kimberley' maintains an edifying and frequently updated blog at freedomrider.blogspot.com. More of her work is also available at her Black Agenda Report archive page.

Pro-war members of Congress are up in arms over a planned anti- war conference in Italy called “Leave Iraq in Peace — Support the Legitimate Resistance of the Iraqi People.” The October event is being organized by the Free Iraq Committees, a coalition made up of the Anti-Imperialist Camp and others, primarily radical European organizations.

The lawmakers have prevailed upon the Italian government to reject visas for speakers at the gathering, prompting a hunger strike by members of the Italian Free Iraq Committee in front of the foreign ministry to demand the visas be issued. The U.S. Congress members have also unleashed a torrent of veiled threats to outlaw the Anti-Imperialist Camp for allegedly supporting terrorism.

This smear campaign against a European anti-war gathering threatens freedom of association and free speech in the global movement. If the U.S. Department of Homeland Security can determine what are “legitimate” anti-war activities on every continent, there will be none at all. It is crucial to defend the Anti-Imperialist Camp and the conference.

An assault on freedom of association. On June 28, 44 Congress members wrote a letter to Sergio Vento, the Italian ambassador, expressing “concern” that “supporters of terrorist activity are planning to meet on Italian soil ... to plan a campaign of financial aid for terrorism.” These luminaries are apoplectic that the Anti-Imperialist Camp launched a “10 Euros for the Iraqi Resistance” campaign in 2000. The slow-moving politicos just now unearthed this “terror plot” by reading stories in National Security Watch and at USNews.com.

After these stories were published in late June, the Anti- Imperialist Camp’s internet hosting company in Utah closed down the Camp’s website (since reopened elsewhere); the Department of Homeland Security admitted that for over a year it had a secret court order requiring the web host to turn over records showing the Internet protocol address of every visitor to the Camp’s website; and Italian police raided the home of Emanuele Fanesi, who held the bank account for the “10 Euros” campaign. An Italian court has since dismissed a terrorism warrant against Fanesi and ordered the return of his confiscated computer and bank records.

On August 2, the “10 Euros” campaign became the subject of two U.S. legislative subcommittees dealing with terrorism and finances when Representative Sue Kelly, in a McCarthy- type ploy, held up a poster depicting a U.S. soldier being shot in front of an Iraqi flag. She claimed the poster was part of the Camp’s fundraising efforts!