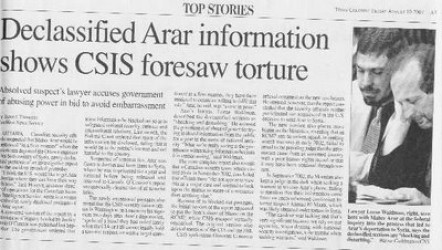 On the morning of May 29, 2006, two senior members of Canada’s security services appeared before the Senate committee on national security and defence. Jack Hooper, then deputy director of operations for the Canadian Security Intelligence Service, sat beside RCMP Commissioner Giuliano Zaccardelli at the witness table.

Senator Hugh Segal had a question for them: Given the “legislative difficulties” they faced, how did the agencies balance the need to prevent violent attacks with their desire to prosecute terrorists?

Hooper, in response, described the creation of an RCMP-led task force that investigated Toronto’s Ahmed El-Maati and a number of other terror suspects in the months after 9/11.

“The Crown advised there was not sufficient evidence to proceed with charges,” he explained, “and the law enforcement community moved quickly into a diffuse-and-disrupt mode designed to prevent acts of violence from taking place.”

Security agencies now use “other techniques” when it proves impossible to take a terror suspect to court, he said, adding: “This has represented something of a sea change for law enforcement agencies.” 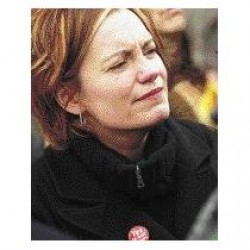 Zaccardelli readily agreed, saying CSIS and the RCMP approach security threats “with a much more extensive menu of options” than in the past. “Particularly since 9/11,” he told the committee, “we have had to accept going to a disruptive mode because prevention is the most important thing.”
In her compelling new book, Dark Days: The Story of Four Canadians Tortured in the Name of Fighting Terror, Ottawa author Kerry Pither contends the agencies’ disruption campaign is at the heart of a national security scandal that goes well beyond Maher Arar.

Dark Days argues that what happened to Arar, Abdullah Almalki, Ahmed El-Maati and Muayyed Nureddin cannot be dismissed as coincidence or explained by the isolated errors of security agents. Rather, Pither contends, their Syrian ordeals were in keeping with the little known disruption policy introduced after 9/11.

All four men were detained and tortured in Syria while under investigation by the RCMP or CSIS for suspected links to terrorism. Despite exhaustive investigations, none has ever been charged with a crime in Canada.

Arar has been cleared of any connection to terrorism by a federal inquiry and awarded $10 million in compensation. The other men have launched lawsuits for the same kind of redress.

“The whole goal of the book,” says Pither, an Ottawa human rights activist, “is to inform as many people as possible about what happened to all of these men and where Canada went wrong in the war on terror.”

Pither has been consumed by the four cases ever since Maher Arar’s wife, Monia Mazigh, walked into her office in May, 2003, to ask for help in securing the release of her husband.

Pither later worked as a communications strategist for Arar — he writes a foreword to the book — and for the three other Canadian Muslims tortured in Syria. She regards Dark Days as the next logical step in her five-year quest to inform Canadians about what was done in the name of national security. (Pither is donating proceeds from her book to Amnesty International.)

“The narrative the public was left with after the Arar Report was that an innocent man (Arar), was vindicated, that it was an isolated case, and it was mostly the Americans’ fault,” she says. “For me, that was really troubling because I knew it wasn’t an isolated case.”

Dark Days knits the four cases back together in a chronological narrative that takes the reader through their intertwined odysseys. The case of Ottawa’s Abdullah Almalki is in many ways the most horrific.

Almalki was 16 years old when his family — his father was a lawyer, his mother a teacher — came to Ottawa from Syria in 1987. Abdullah graduated from Lisgar Collegiate, then obtained an electrical engineering degree from Carleton University. He married a fellow student, economics major Khuzaiman Kalifah, and they had five children (now six) while Abdullah launched a successful export business.

Almalki’s first contact with CSIS came in the summer of 1998 when an agent phoned to arrange a meeting: she said some of his communications equipment had been found in the hands of the Taliban. He would meet with agents several times to explain that he shipped store-bought equipment to a Pakistani firm, Microelectronics, which held contracts with that country’s military.

Pither’s book describes in graphic detail the 22 months he subsequently spent in Syrian custody and the torture sessions Almalki endured in Far’ Falastin prison. He was beaten with fists, cables and belts. More often than not, the questions he faced related to events and people in Canada. The Arar Commission has established that the RCMP sent questions for Almalki to the Syrians through Canadian diplomats.

What happened to Almalki, El-Maati and Nureddin, says Pither, amounts to a kind of “opportunistic rendition,” in which Canadian officials took advantage of suspects traveling abroad in a country known for its human rights abuses. “I think Canadians pride themselves on being better than the U.S. on human rights issues,” she says. “I think these cases show we weren’t.”

The security services are not the only ones whose image suffers in Dark Days: the media’s role in serving the interests of power also comes under critical scrutiny. Pither analyses the unfolding media coverage from the first damaging story leaked about Arar in November, 2002 through to those that cast doubts on Almalki and El-Maati.

Those leaks, Pither says, appear to have been been part of an orchestrated media strategy on the part of government officials. “Do I believe they attempted to detract from their own shortcomings by smearing the men? Yes. Is that a coverup? Yes, I think so,” Pither charges.

But what if those sources have a self-interested, dishonest agenda?

Carleton University journalism professor Jeff Sallot, a former Globe and Mail reporter who distinguished himself in his coverage of the four cases, says the media have yet to come to terms with their role in them.

“There’s a real soul searching that still need to go on about how we (the media) were badly abused in the Arar case, and I think in the Almalki case and in the El Maati cases as well,” he tells Pither. “The big lesson is to always question your sources — not just because they may have an agenda but because they may have imperfect knowledge.”

Pither’s narrative stretches to 403 pages; it is followed by 34 pages of footnotes and a seven-page cast of characters.

In places, the detail is excessive (“The guards led him along the wider hallway past the common cells and then turned right down the narrow hallway, stopping at the second tiny door on the right: cell number two.”) More often, though, Dark Days is a gripping exposé in the finest journalistic tradition: it is a crisp and disturbing book.

Pither’s depiction of the government’s side of the story relies, almost entirely, upon the three-volume report of the Arar Commission, which she has mined for telling facts.

Dark Days poses many such questions: What role did CSIS and the RCMP play in the detention and torture of the men? What did Canadian agencies do with the fruit of that torture? And in what way did Canada’s political leadership, including Prime Minister Jean Chrétien and cabinet ministers John Manley and Anne McLellan, set the tone for the agencies’ actions?

Ultimately, Pither hopes the book will help lift the lid on the secrecy that still surrounds the cases. A second federal commission, the Iacobucci Inquiry, will report later this year on the government’s involvement in the cases of Almalki, El-Maati and Nureddin. All of the evidence in that inquiry has been heard behind closed doors.

Citizen senior writer Andrew Duffy has covered the Almalki case since first interviewing him in October, 2005.

After the Sept. 11 terror attacks, Almalki came under renewed scrutiny. He was the central focus of an RCMP joint forces team, Project A-O Canada, that investigated a number of terror suspects supplied by CSIS.

His background raised legitimate questions. In the early 1990s, Almalki had worked in Pakistan and Afghanistan for Human Concern International, an Ottawa-based charity that performed development work in the Muslim world. The man who would ultimately be identified as the highest-ranking Canadian member of al-Qaeda, Ahmed Said Khadr, was his boss at H.C.I.
Almalki also had a business relationship with Mohamed Elzahabi, a U.S.-based Lebanese national who once trained sharpshooters at an al-Qaeda camp in Afghanistan.

Almalki has always insisted there was nothing more to the relationships than that: they were not part of a terrorist conspiracy.

Pither’s contention is that the RCMP, unable to gather evidence to prosecute Almalki as a terrorist, then engaged in a “disruption” strategy. He was followed constantly and in plain sight. A camera was mounted across the street from his Ottawa house.

Almalki left the country on Nov. 27, 2001 with his family to escape what he considered harassment. They travelled to Malaysia to stay with his wife’s relatives.

On May 3, 2002, Almalki flew to Syria to visit relatives but was detained before he could leave the airport. It’s an open question as to why he was he detained: whether at the request of Canadian officials or because of faulty intelligence provided by this country.