The Problem with the Congressional Ft. Hood Investigation Witness List 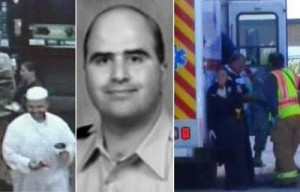 The first public congressional hearing on the Fort Hood attack will not include testimony from any current federal law enforcement, military or intelligence officials because the Obama administration "declined to provide any" such witnesses, according to a Senate committee source.

The Senate Homeland Security and Governmental Affairs Committee has released the witness list for its hearing "The Fort Hood Attack: A Preliminary Assessment," scheduled for Thursday at 10 a.m. ET. The list includes four experts on terrorism and intelligence issues: retired Gen. Jack Keane, the former U.S. Army vice chief of staff; Brian Jenkins, a senior advisor at the Rand Corp. [also the extremely conservative International Chamber of Commerce]; Mitchell Silber, the director of analysis for the New York City Police Department's Intelligence Division; and Juan Zarate, a senior advisor for the Transnational Threats Project at the Center for Strategic and International Studies.

ONLY PROBLEM WITH THIS "WITNESS LIST" (BESIDES A STONEWALLING, FOOT-DRAGGING EXECUTIVE BRANCH, SPOOKS, THE WAR-MAKING RAND CORP. AND CSIS BLACK PROPAGANDA SPECIALISTS) IS ...

... the list does not include anyone actively involved in investigating the Fort Hood attack, or anyone who might have been responsible for decisions made by various government agencies before the attack about whether to investigate the shooting suspect, Nidal Hasan. . ...