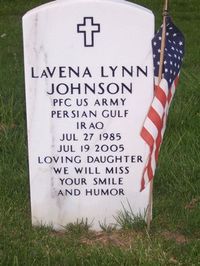 LaVena Johnson was a 19 year old U.S. Army private from St. Louis. She was serving in Iraq when she was found dead in July 2005.

The Army ruled her death a suicide. They told her family that she suffered from depression and was upset about a break up with her boyfriend. They claim that LaVena took her own life with her M-16 rifle. Ninety-four women have died since the Iraq war began in 2003. Twenty of those deaths were suspicious and categorized as either "non-combat related injuries" or suicide. When her father, Dr. John Johnson, went to examine his daughter's body, he found conflicting evidence that pointed to a different cause of death - rape and murder.

Webster University held the debut screening of the film, "The Silent Truth." It was shown the day before Veteran's Day in the Winifred Moore Auditorium. The audience was standing room only. The film was created by director, Joan Brooker Marks of Midtown Films. Marks teaches film at the School of Visual Arts in New York. She also directed two award winning short documentaries, "We Got Us," and "The Loud Ladies of South Fork."

This documentary focuses on the struggle of a family to find justice for the death of their daughter, Lavena Johnson.

The film closely examines evidence and raises even more suspicion that suggests a military cover-up. Evidence shows a bullet wound to the top of her head, which is impossible in a suicide. She also had what appeared to be a broken nose. Other evidence includes bloody and severe mouth damage as well as vaginal injuries coinciding with rape.

Prior to his daughter's death, Dr. Johnson spent three years in the Army. He was honorably discharged. He also worked for the Army for 25 years as a civilian.

Johnson is now retired. He feels a great disservice from the government and the military. "Out of all our [military] service, this is the best we've gotten and it's insulting to me," said Johnson. Johnson has been back and forth with the military since the tragic beginning. He now leads the media campaign with hopes of getting the attention of Congress.

Johnson said he hopes Congress will take steps to end this vicious cycle and make the military honest. "Nobody comes to me and insults my family and then expect for me to accept it." Johnson said. "That's not happening in America today, and it's [not] going to happen with me." Johnson's wife, Linda, has been by his side every step of the way.

"They silenced my daughters voice," Johnson said. "She has no one to speak for her except for her dad & her mom." After the screening, she spoke about the pain and suffering she's endured. She also speaks about keeping the faith and putting that faith into action.

"If we decided to be silent, no one would've picked up the ball and ran with it", Linda Johnson said.