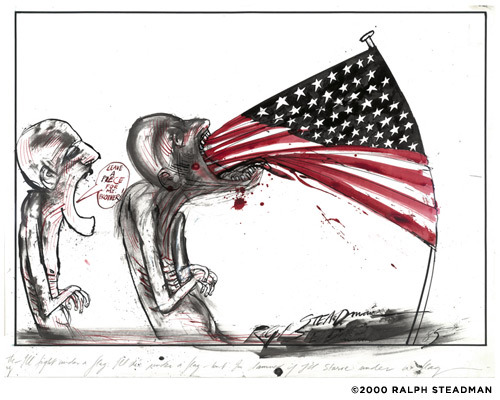 We are gathered here today to mourn the loss of America's mind.

It was last seen last month in Oklahoma. There, voters gave emphatic approval to a measure outlawing the use of Shariah law — a strict and often brutal interpretation of Islamic religious strictures — in state courts. Shariah is not known to be a problem in Oklahoma, or, for that matter, anywhere else in the United States, something even the bill's backers concede. But, said the initiative's sponsor, then-Republican state Rep. Rex Duncan, why wait?

Of course, by that reasoning, one can also justify laws regulating time travel, flying cars and pink unicorns pooping in public parks. Should we assume Oklahoma legislators are hard at work on laws to restrict these and other non-existent troubles?

Probably not. After all, unlike other purely fictional problems, the Shariah "issue" allows a demagogue to exploit a tender spot in the American psyche: our growing fear of all things Muslim.

On Monday, a federal judge issued a preliminary injunction banning implementation of the new law. The ruling came in response to a suit filed by Muneer Awad, executive director of the Council on American-Islamic Relations in Oklahoma. ... But even if Awad ultimately prevails, it would not address the underlying problem. Meaning, the loss of America's mind. That loss has occurred with distressing frequency over the years, often coming in times of hysteria and fear, often involving the demonization of some American subset for the actions of those with whom they share some cultural, racial or religious trait.

For instance, Americans of German descent were bullied and beset during the First World War in a nation that found it necessary to rename sauerkraut "Liberty Cabbage." Americans of Japanese descent were imprisoned during the Second World War, many of them losing their homes and livelihoods.

You'd think that sordid history would make us wary of entreatments to blindly castigate our fellow Americans. And you would be mistaken.

To his credit, President George W. Bush explicitly rejected the reflexive fear of all things Muslim in the wake of the Sept. 11 attacks. But to its discredit, his party nonetheless chose to embrace that fear, to exploit and campaign on it throughout the decade.

Here, now, is the result. We move through a perilous time that demands serious consideration of serious issues — airline security, energy dependence, the radicalization of American citizens — but we, profoundly unserious people that we are, fret instead about saving Oklahoma from Shariah law, solving a problem we do not and will not have.

Thoughtful people ought to be alarmed.

The goal of terrorism, you see, is not to make a nation bleed but to make it fear.

Oklahoma's nonsensical law suggests our enemies have been successful in that. One recalls how Bush stood beneath a banner that crowed of a victory against terrorism. But to the degree Oklahoma accurately reflects our national mind-set, it is the terrorists who deserve to hoist that banner. America is scared stupid.

Leonard Pitts is a syndicated columnist based in Washington.

This is the hazard of eye for an eye fundamentalism of any religious stripe; that it is OK to attack a group of people for a nice falsified reason. Like shelling the people in southern lebanon with phosphorus for false allegation of providing material support for terrorists. Hey if you are a fascist murderer with morals, any reason will do.

The True Impact of Violence On Childhood? Why Every American Ought To See The Paintings Of Gottfried Helnwein