Nazism » FBI Believed Hitler Faked His Own Death in 1945 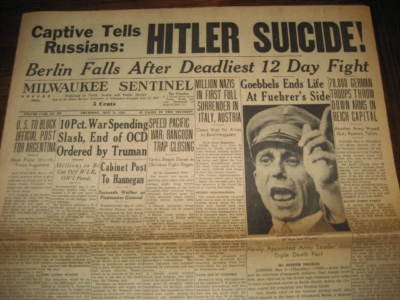 America’s FBI is set to reveal its secret files on Nazi leader Adolf Hitler, which details the agency’s attempts to find him despite reports of his suicide in 1945.

On 29 April 1945 Hitler and Eva Braun, his wife of one day, killed themselves in the Berlin bunker. But Soviet authorities who found the remains were happy for rumours to persist that he got away.

Now 752 sides of FBI reports chart how agents previously thought he was hiding out on a ranch in Argentina, living in a hotel in Denmark and in New York City, reports the Scotsman.

For almost 30 years, FBI director, J Edgar Hoover and his agency maintained a detailed dossier on Hitler and closely investigated any report that indicated he still was alive, believing the Russian line that he escaped the flames of Berlin.

One theory Hoover ordered his agents to pursue was an extensive 11-year probe into the possibility that Hitler faked his own death with a bogus suicide in 1945. However, years later, the truth emerged from the files of SMERSH - Russia's elite intelligence service meaning 'Death to Spies' - which proved from the reports of Hitler aides in the bunker that he shot himself.