Who Ran the CIA Anti-Castro Kill Teams in the '50s? - The Constantine Report
0 SHARES

American Terrorism » Who Ran the CIA Anti-Castro Kill Teams in the '50s?

Who Ran the CIA Anti-Castro Kill Teams in the '50s?

Before they shot John Kennedy ... 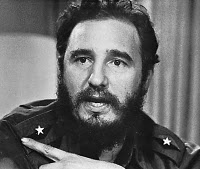 " ... [Iran-contra was] only one episode in a much longer and more convoluted tale. An earlier "Contra" war had been mounted against Cuba under the direction of Richard Nixon, then vice president, beginning in the late 50s. With the cooperation of Mafia don Santo Trafficante, a private "sub-operation" had been developed to assassinate Cuban leaders. Members of the "shooter team" included Rafael "Chi Chi" Quintero, who later coordinated arms shipments to the Contras with Secord; Felix Rodriguez, a CIA operative who headed the Ilopango operation during the 80s and met several times with Bush; and several of the future Watergate burglars. The Cuban operation was supervised by Secord associates Shackley and Clines. ... "