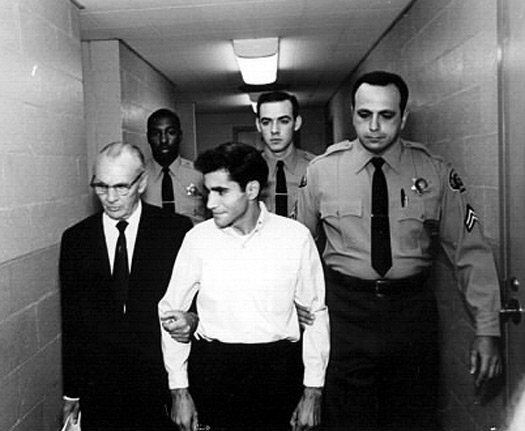 Sirhan Sirhan is scheduled to go before a California parole board for a 13th time Wednesday, bringing to my mind two memories.

The most recent involves Shane O'Sullivan's documentary RFK Must Die, which I caught on the TV over the weekend. The title comes from words scrawled in a notebook found in Sirhan's Pasadena home after the assassination of Robert F. Kennedy in 1968.

The other memory involves Representative Dana Rohrabacher (R-Huntington Beach) posing as a woman to interview Sirhan at Corcoran State Prison in 2007.First, the film: Sirhan, who is now 66, admits "RFK must die" appears in his handwriting in the notebook, although he does not remember writing it. This folds into his defense that he was brainwashed into killing Kennedy, yet has no memory of doing so.

"RFK must die" also sums up the feeling some U.S. government spooks harbored toward the New York senator who had just won the Democratic Party's presidential primary in California. He was apparently hated because of his role in the "Bay of Pigs" fiasco during his brother's presidency, as well as his condemnation of the Vietnam War while on the campaign trail.

O'Sullivan first builds a case in the movie that some RFK haters within the CIA were in the Ambassador Hotel in Los Angeles the night Kennedy was slain. Do you know who else says he was there that night? Rohrabacher! We'll get back to that, promise.

Some of those interviewed in the documentary identify men seen mingling in the Ambassador victory-party crowd as CIA operatives they worked with at the agency's main anti-Castro station in Miami in 1963: David Sánchez Morales, chief of operations; Gordon Campbell, chief of maritime operations; and George Joannides, chief of psychological warfare operations. The mood at that station was decidedly anti-Kennedy because JFK refused to provide air support to freedom fighters who were eventually slaughtered by Fidel Castro's forces.

Some have identified Morales as the "Latino-looking man" seen with Lee Harvey Oswald in New Orleans in 1963. Morales' friend Ruben Carbajal said in 1973 that Morales once said, "Kennedy had been responsible for him having to watch all the men he recruited and trained get wiped out. Well, we took care of that SOB, didn't we?" In O'Sullivan's film, Robert Walton, Morales' former attorney, is heard quoting his client as having said, "I was in Dallas when we got the son of a bitch, and I was in Los Angeles when we got the little bastard."

Joannides was involved with some of the same organizations Oswald was in during the months leading up to JFK's assassination. Years later, that fact made G. Robert Blakely, the chief counsel and staff director to the 1977 House Select Committee on Assassinations, question the answers (or lack thereof) his researchers got from the CIA. Why? Because Joannides was the CIA staff liaison to Blakely's committee. Joannides died in 1990.

Campbell probably was not at the Ambassador that night, either, as he apparently died in 1962. I say apparently because he also was supposedly in Miami in 1963. Hmmm. The man previously identified as Campbell at the Ambassador could have been Michael D. Roman of the Bulova Watch Co., which was holding a convention at the hotel that night. But just to tickle your conspiracy bone more, O'Sullivan stencils a link between the watch company, which was once run by U.S. General, Retired, Omar Bradley and the CIA. Roman is now deceased. The CIA refused comment to O'Sullivan on any of these cats.

Perhaps more compelling is the documentary's look at the number of shots fired inside the Ambassador kitchen that night. Sirhan's gun held eight bullets, and because he fired some shots while being pinned down by burly men, he obviously did not have time to reload. RFK Must Die includes analysis of freelance reporter Stanislaw Pruszynski's audio recordings made that night, the only such recordings known to exist.

Arizona forensic expert Philip Van Praag concludes 13 shots are heard on the tape. He was later backed up by forensic audio specialists Wes Dooley and Paul Pegas of Audio Engineering Associates in Pasadena; forensic audio and ballistics expert Eddy B. Brixen in Copenhagen, Denmark; and audio specialist Phil Spencer Whitehead of the Georgia Institute of Technology in Atlanta.

William F. Pepper, Sirhan's New York-based attorney, will no doubt point to this evidence. Pepper previously argued that James Earl Ray, who was convicted of killing civil-rights leader Martin Luther King Jr. two months before RFK was slain, was framed as part of a government conspiracy involving the FBI, the CIA, the military, the Memphis police, and organized-crime figures from New Orleans and Memphis. Makes one wonder if Morales, Campbell and Joannides were in Memphis for that assassination. And what brand of watches were they wearing?

Back at the Ambassador, my colleague R. Scott Moxley riffed in 2008 on the Pasadena Weekly story involving Sirhan and Rohrabacher. Rohrabacher Went in Drag to Solve Already Solved RFK Assassination? 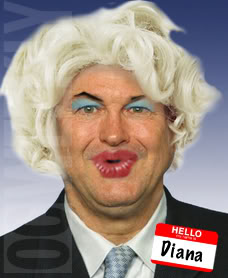 As entertaining as Mox's words were, the thing that really sells the post is the illustration of Rohrabacher as a tranny (at right). Here's the backstory: Pasadena Weekly reported on Sirhan retaining Pepper and being visited by Rohrabacher at Corcoran.

The congressman had apparently been attending another party at the Ambassador the night RFK was killed--perhaps he was at the shindig the CIA and Bulova co-sponsored.

"While I was walking into that party, somebody ran past me and bounced off me," Rohrabacher told Pasadena Weekly's Carl Kozlowski.

"The guy was wrestled to the floor in front of me by either security guards or police, and he was hauled out right in front of me. . . . The guy looked exactly like Sirhan Sirhan, a young Arab-looking guy. Was the guy I saw Sirhan or somebody else? Either way, that's a big deal because nowhere does it ever mention another Arab being there that night, nor does it mention that he was under police custody." Rohrabacher should rent RFK Must Die off Netflix. A woman who was catching some air outside before the shooting says two young Arab men and a pretty Anglo woman in a white dress with dark polka dots walked into the Ambassador. The witness later heard some commotion inside followed by the woman in polka dots and one of the men storming out. When the witness asked what happened, the female told her, "We just shot Kennedy." The witness claims a police interrogator later forced her to recant that recollection to spare the Kennedy family's feelings.

The congressman is also convinced Sirhan did not act alone, although he discounts the idea the Christian Palestinian was brainwashed, calling that "leftist nonsense." So, to get answers in early 2007, Rohrabacher posed as "Diana" and communicated with Sirhan. A meeting was soon arranged at Corcoran, but instead of Diana walking in, it was Dana.

"I went to see [Sirhan] specifically because I believe he didn't act alone and that the full story of Bobby Kennedy's assassination has not been known," Rohrbacher explained to Kozlowski. "I would like Sirhan Sirhan to finally, at long last, level with the Kennedy family and the American people, whether to clear his soul as part of his Christian beliefs or try to set the record straight."

The Surfin' Congressman is said to have badgered Sirhan into admitting he killed Kennedy, which is no big whoop since Sirhan said that all along. He just does not remember it. Allegedly.

Someone once said we may never know who really killed JFK. Perhaps the same can be said of RFK. Then there is the biggest mystery of all: Did the chick in the polka dots go by the name Diana?