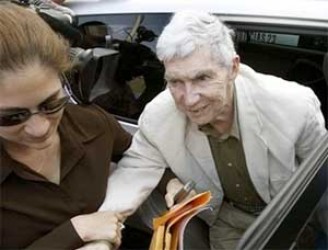 A dinner with 500 fellow Cuban exiles honors the militant and former CIA operative, now 80 and still wanted in Venezuela on terrorism charges. The dapper octogenarian in a crisp blue suit, his face smoothed by plastic surgery, swanned from table to table in the candlelit banquet hall, bestowing kisses and collecting accolades.

An aging movie star being feted by fans? A veteran politico taking his bows?

No, the man being honored by 500 fellow Cuban Americans at a sold-out gala was Luis Posada Carriles, the former CIA operative wanted in Venezuela on terrorism charges and under a deportation order for illegally entering the United States three years ago.

Posada, 80, has mostly kept a low profile since his release from a Texas prison a year ago and a federal judge’s dismissal of the only U.S. charges against him – making false statements to immigration officials. But recent events like the Friday dinner and an exhibit and sale of his paintings last fall show that the man who spent his life trying to topple the communist government of Fidel Castro has returned to the social forefront of this city’s exile community.

“We are coming to the end of a terrible stage. The end of our struggle is near,” Posada told the crowd of supporters in evening dress, referring to Castro’s failing health.

Venezuela’s ambassador in Washington, Bernardo Alvarez Herrera, condemned the celebration of Posada as a mockery of justice and evidence of a Bush administration double standard in fighting terrorism.

“This is outrageous, particularly because he kept talking about violence,” Alvarez said of Posada. “He said that the whole thing now is ‘to sharpen our machetes’ ” for a confrontation with leftist regimes in Latin America. ...