On Wednesday it will be 30 years since John Lennon’s murder, an event seared upon the memory of a generation. Now, in a new documentary, fans, police officers and doctors recall the day their lives were intertwined with history 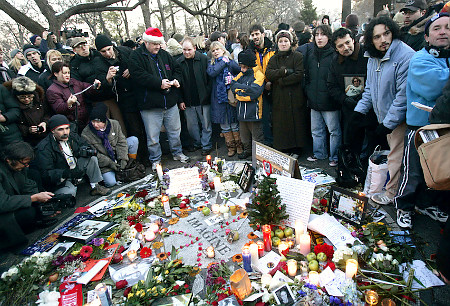 The flash-lit picture, snapped 30 years ago on a Manhattan street, froze a notoriously sinister moment. Amateur photographer and Beatles fan Paul Goresh had captured the first encounter between John Lennon and the killer who would, a few hours later, end the star’s life. Goresh could not guess the significance of the scene when his camera shutter flickered, still less could he have predicted the impact it was to have on his life.

That night the news of the murder of Lennon seemed to stop time, as a photograph does, right across the globe. When reporters and broadcasters broke the story to an astonished international audience, normal daily routines were suspended. Only news events with the power to truly shock have this effect.

Wednesday will see the anniversary of the killing that ended Lennon’s iconoclastic career and terminated all forlorn hopes of a reunion for the most successful pop band in history. To mark the 30 years that have passed, the acclaimed British film-maker Michael Waldman has tracked down many of the people who witnessed the key events of 8 December 1980 – the last day in the 40-year-long life of a very famous man.

“I found myself sitting next to Yoko Ono [Lennon’s widow] on a plane and was later able to persuade her to be interviewed,” said Waldman. “We showed her the footage in London earlier in the year. She told me it was ‘tough’ to watch, but she gave her permission for us to use it.”

Waldman’s documentary for ITV unravels the timeline of a crime that fans still struggle to comprehend. The film, The Day John Lennon Died, includes the recollections of a wide range of those intimately involved, including the testimony of a policeman who arrived at the New York apartment block to apprehend the gunman and the words of Yoko Ono, who reflects on the events that led to the shooting.

Ono tells Waldman of her horror at the scene and reveals that she has often wondered about her prophetic decision to record a song earlier that day with the lyric “walking on thin ice”. While the film focuses on the experiences of the witnesses and the movements of the Lennons that day, Ono has the emotional composure to tell Waldman that her husband’s decision to come straight home from the recording studio, rather than going out to eat, was not as fateful as it seems. “It would not have avoided anything horrible happening,” she says.

The film-makers’ efforts to secure an interview with Ono about her final day with her husband were equalled by their struggle to track down Goresh. Both interviewees have startling memories to share that will change public perceptions of what happened on the corner of 72nd Street, outside the Lennons’ home in the Dakota building.

Goresh, who has lived on the margins of society since he took his photograph three decades ago, was reluctant to speak about his traumatic memories. A devoted fan of the Beatles, and of Lennon in particular, he had become friendly with the star and occasionally accompanied him on short walks around the neighbourhood. It is Goresh’s image of the couple leaving the Dakota that Ono chose for the cover of their single, “Watching the Wheels.”

“It was what Goresh lived for, really,” said Andy Blackman, a New York-based researcher who worked with Waldman on the film. “And on that day everything changed for him. At some level he did not want to be found by me or anyone.” 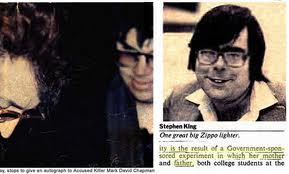 The documentary crew interviewed Goresh in a diner near the Dakota, where he explained that earlier on 8 December he had spoken to Mark Chapman, who told him he had flown in from Hawaii. When Lennon came out of the apartment block, Chapman held out a copy of Lennon’s new album, Double Fantasy, for a signature. Lennon obliged, asking, “Is that all you want?” and Goresh took his photograph.

When Goresh heard later that Lennon had been shot by a fan from Hawaii, he was filled with repulsion. “I immediately realised who it was. You can’t imagine the disgust and anger I felt,” he tells Waldman.

Goresh rang the police to tell them he had a photograph that would identify the killer, but they did not want to hear. So he called the New York Daily News instead. His sale of the infamous picture, which was beamed around the world, made Goresh a controversial figure among the close-knit band of Lennon devotees in Manhattan, says Blackman, but his initial instinct had been to provide a piece of evidence. “His world changed hugely, as it did for lots of fans, but actually being there on the day, I think it has been very difficult for him,” said Blackman.

The documentary, made for ITV by Finestripe Productions, also features an extensive interview with the radio journalist who interviewed Lennon on the day of the murder and with the recording team working with Ono and Lennon on “Walking On Thin Ice.” In addition, the policeman who arrived at the scene after the concierge at the Dakota had dialled 911 gives a compelling account of his confusion on arrival. He says the gunman was already inside the gates and that he watched as Lennon’s wounded body was carried out by colleagues for the emergency dash to the Roosevelt hospital. The accounts of those inside the hospital when Lennon was pronounced dead are gripping. Waldman interviews Dr Steven Lynn, who held Lennon’s heart in his hands, in a vain attempt to massage it back into activity, and then had to break the news to Ono that his attempts had failed. 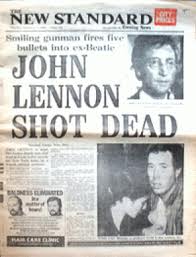 Listening to the doctor’s efforts from close by on the night was Alan Weiss, a news editor from a leading television network, who had coincidentally been admitted to A&E after falling off his motorbike. Weiss had been astonished to see the lifeless body of one of the most famous men in the world rushed into the emergency room, accompanied by the unmistakable figure of Ono. He called his news desk to alert them.

“The piped music in the hospital began playing All My Loving and as it finished I heard someone screaming,” Weiss recalls. Lynn had just told Ono that she had been widowed.

“Thirty years later, all the people involved have an extraordinarily detailed memory of it all,” said Waldman this weekend. “The newsman inside the hospital told us he had always worried that his call to his colleagues might have meant that John and Yoko’s son, Sean, had heard about the death before his mother got home. But the hospital administrator, all these years later, was able to reassure him that there was an information blackout until Sean had been told.”

Like the violent deaths of John F Kennedy or, more recently, of Princess Diana, the killing of John Lennon provoked a soul-searching examination of the broader context of the incident and of society itself. And, like those other shocking deaths, Lennon’s provoked its share of conspiracy theories. Just as Kennedy has his grassy knoll, and Diana her mysterious white Fiat Uno, Lennon’s death is dogged by suggestions that the doorman, Jose Perdomo, who guarded the Dakota building from his seat in a golden sentry box on the pavement, was implicated in the death.

During his research for the documentary, Blackman satisfied himself that Pederma is now dead but he does not discount the idea that the Cuban had some previous contact with the Central Intelligence Agency during the failed Bay of Pigs anti-Castro coup of 1961. Chapman’s subsequent confessions and the corroborating evidence of others who knew him make any claim that this was a professional assassination very unlikely, Blackman believes.

The film attempts to measure the wider impact of Lennon’s murder by talking to several of those who had a special reason to care. Thelma Pickles, who was Lennon’s girlfriend during his early days at art school in Liverpool, tells Waldman that she was working for Granada Television when she heard of the death. Called into the newsroom, she had to travel past Mendips, the house where she had spent many hours with Lennon, and found it hard to believe the news.

Cilla Black, who knew Lennon in Liverpool, talks of her effort to contain her emotions during a concert that night, while Liam Gallagher, the lead singer of the band Oasis, talks about his feelings for Lennon, after whom he named his son, while he sits on the roof of the former Apple building in London, site of the Beatles’ last public concert. 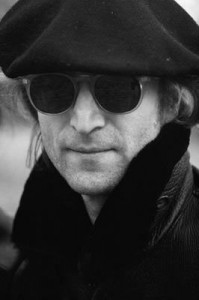 Time has inevitably altered the significance of the killing. In October this year, eight undergraduate contestants on University Challenge were unable to identify Lennon’s single Starting Over, a Top 10 hit in November 1980 which then went to No 1 after his death.

Whether Lennon still looms large for audiences today or not, Waldman has been careful to play down the significance of his killer in the film. Chapman is never named and the film-makers let Goresh dismiss his importance. “The death achieved what that piece of garbage wanted it to achieve. He had linked his name to John Lennon’s for ever.”

Trading with the Enemy
Dec 04