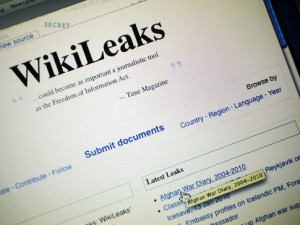 PARIS — Lawyers for ex-inmates of the Guantanamo prison camp used documents released by WikiLeaks to argue for their acquittal in a French terrorism trial Thursday.

Five Frenchmen held at the prison were acquitted by a French appeals court of terrorism charges in 2009, in a high-profile disavowal of the camp. But then a new trial was ordered. As that trial opened Thursday, defence lawyers presented at least three U.S. diplomatic cables citing French anti-terrorist investigators.

The lawyers argued that it was inappropriate for French investigators to have discussed the ex-inmates’ cases with American authorities. The prosecutor dismissed the argument and urged the court to sentence the five to one-year prison terms. The defendants were not present at Thursday’s trial.

In one March 2005 cable, French investigators told American officials that the cases against two of the ex-Guantanamo inmates, Ridouane Khalid and Khaled Ben Mustafa, “would be much more difficult” than for other French former inmates of the prison. The cable was among many released recently by WikiLeaks.

Lawyer William Bourdon called this kind of discussion “clandestine co-operation” with Washington at a time of broad criticism of the Guantanamo prison and U.S. anti-terrorism tactics.

Lawyer Dominique Many said it “shocked” him that investigators would discuss ongoing cases with the U.S. government.

The men, who were arrested in Afghanistan in 2001, each spent up to three years in custody at Guantanamo and in France. They were sent back to France in 2004 and 2005. The Paris criminal court in 2007 convicted the five — Khalid, ben Mustafa, Brahim Yadel, Nizar Sassi and Mourad Benchellali — of “criminal association with a terrorist enterprise,” a broad charge often used in terror cases in France.

During their original trial, the suspects had acknowledged having spent time in military training camps in Afghanistan, but said they had never put their combat skills to use.

In 2009, a Paris appeals court ruled that agents from the French counterterrorism agency DST who questioned the five inmates at Guantanamo had overstepped their roles, and overturned the convictions.

Then in 2010, France’s highest court overruled that acquittal, and ordered an appeals court to rehear the case.

France is among the few Western countries to prosecute nationals who have returned home from Guantanamo.