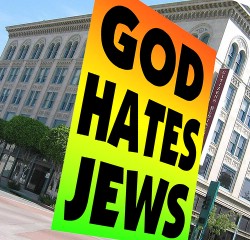 Demonstrators from the Westboro Baptist Church visited Wayne State on the morning of Nov. 18 to protest Jewish people and other demographics.

Four members of the WBC –- which is based in Kansas and is best known for its explicit homophobia and disruption of military funerals – organized at the intersection of Second and Warren avenues, near the Life Science building.

Their purpose for the 23-minute visit, during which they sang racist parodies of the Israeli national anthem, Hava Nagila and Hey Jude (“Hey Jews”), was to protest Hillel of Metro Detroit, “the foundation for Jewish campus life,” according to the organization’s website.

According to the WBC’s website, the “Jews have spent centuries coming up with ‘traditions’ that have nothing to do with scripture much less obeying the commandments of God. They have made an idol out of their unscriptural rituals.”

But they also found time to shout “God hates (homosexuals).”

WBC was represented by four sign-bedecked singers. One of the WBC protesters left halfway through, while the counter-demonstration swelled to between 60 to 70 people in the toward the end.

WBC’s delegation was protected at all times by WSU police, and members of the Michigan Militia were there to keep the peace as well.

Counter-demonstrators wore homosexual pride symbols, Guy Fawkes “anonymous” masks from the website “4chan,” and patriotic decorations, and carried light-hearted signs that relied on Internet memes. They laughed as often as they chanted about tolerance and sang pop songs.

Miriam Starkman, Executive Director for Hillel in Southeastern Michigan, said, “(WBC is) a hatred group, but we have a Wayne State community, both students and faculty, that work to make both Hillel and Jewish students feel secure and welcome here, and we appreciate that very much. Hopefully some good will come out of this and student groups will come together and put together a program that will promote tolerance, civility and understanding.”

Matt Savino, a Muslim who called himself the commanding officer of the 8th division of the Michigan Militia Corps Wolverines, observed the WBC delegation with two fellow militia members in fatigues and boots.

“We’re actually following (the WBC quartet) around the state to ensure they don’t violate any Michigan citizens’ rights,” Savino said. “They were in Dearborn earlier at the Islamic Center, and later they’ll go to an East Lansing High School. We have to follow them closely because their (online) schedule isn’t very accurate.”

Savino also said it was “self-defeating” for WBC members to disrupt military funerals while depending on First Amendment rights guaranteed by the soldiers they insulted.

Counterdemonstrator Liano Sharon said, “I’m personally against the recent wars, but you still don’t disrupt somebody’s funeral. (WBC members) deserve to be mocked for their insensitivity.”

His friend Eric Braun added, “I appreciate their First Amendment rights. I have those too; I’ll use them to prove that stupidity doesn’t win.”