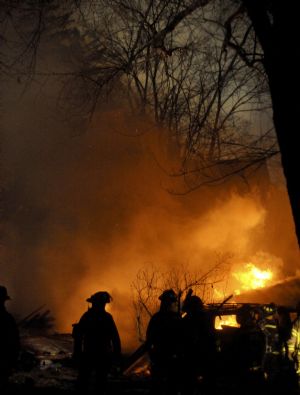 "The group's Web site address is 'Godhates ...' with the final word being a derogatory term for gays. ... "

Dozens of counterdemonstrators swarmed three members of a Kansas-based hate group when they tried to protest near a Main Street church where a memorial service for a Continental Flight 3407 crash victim was being held this afternoon.

The protesters, from Westboro Baptist Church in Topeka, Kan., left the area near St. Joseph University Catholic Church, near the University at Buffalo's South Campus, at about 1:50 p.m., only a few minutes after they arrived.

Patrick McGrath, a freshman at Buffalo State College, attended the counterdemonstration and said, sarcastically, he hoped the Westboro members got their word out in the few minutes they walked along Main Street.

"As a community, we sure did," McGrath said.

This afternoon's counterdemonstration near UB's South Campus was planned after the Topeka group, a fringe organization whose members hold virulent anti-gay views and who protest at funerals of American soldiers killed in Iraq and Afghanistan, announced it was going to picket a memorial service for human rights advocate Alison Des Forges, one of the 50 victims of the crash.

The group's Web site address is "Godhates..." with the final word being a derogatory term for gays. Westboro Baptist also is monitored by the Anti-Defamation League, and is classified as a hate group by the Southern Poverty Law Center.

More than 150 people lined an area of Main Street near Niagara Falls Boulevard, an effort they said was intended to shield those attending the service for Des Forges from having to view the Westboro group.

Organizers said about 90 of the counterdemonstrators were wearing white plastic angel wings. Others carried large white cloths, some fashioned into large flags, which they held while standing along sidewalks.

Many of those gathered were UB students.

Lambert said she hopes the Des Forges family knows the event was intended "not to disrupt, but to support."

"This was done because we love what Alison stood for," she said.

Earlier today, about 100 people gathered in Clarence Center as part of another counterdemonstration against the Westboro group.

The counterdemonstrators, including more than 60 wearing the white plastic angel wings, crowded two street corners across from the three-person protest at Clarence Center and Goodrich roads.

The Westboro demonstration was intended to coincide with what the hate group thought would be a community prayer service for victims of the crash being held at Zion Lutheran Church, just two blocks from where the protesters gathered. However, church officials said they were holding normal Sunday services.

"Hatred in the name of Jesus is a despicable thing," said Zion Lutheran Pastor Randy Milleville.

The counterprotests took many forms, and included individuals from across Western New York, as well as groups including Vietnam Veterans Legacy Club.

Joe and Marilyn Ruszala of Hamburg held homemade signs along the side of Clarence Center Road.

"I'm not standing for this in my neck of the woods," Marilyn Ruszala said. "This doesn't belong anywhere, and if no one stands up they'll get away with it."

Her husband added, "Something just enrages you to the point where you've got to do something. You just couldn't sit home and do nothing."

Autumn Fiscus, 16, a member of Zion Lutheran, painted a sign with acrylic paints and candle wax. On the opposite side of the sign, she painted Bible verses she said contradicted the Westboro protesters' anti-homosexual beliefs.

Political Intimations of an Orchestrated Epidemic Before Swine Flu