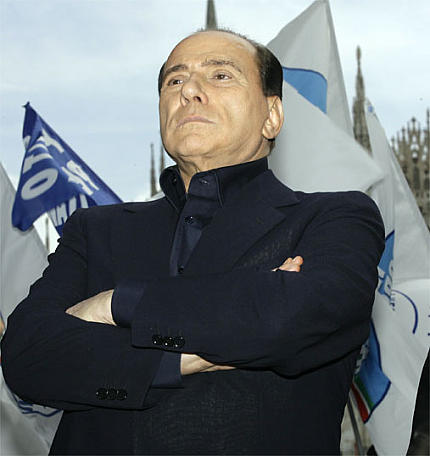 Milan, Italy - It has been a rough two days for embattled Italian Prime Minister Silvio Berlusconi, whose governing right-wing coalition seems closer to collapse than at any point in its rocky tenure. Monday saw the resignation of four cabinet members close to Gianfranco Fini, the parliamentary leader who recently broke from Mr. Berlusconi's Freedom Party.

Today, President Giorgio Napolitano summoned the heads of the Senate and of the Lower House for consultations, an emergency measure that might signal the calling of early elections or the institution of a temporary government. But also on Tuesday, the leaders of the opposition vowed to wait until the budget is passed this month before voting a no-confidence motion on the government.

"The countdown for the end of the Berlusconi era has begun," said Michele Meta, a parliamentarian from the Democratic Party, the major opposition force.

Berlusconi, a flamboyant media and construction tycoon and owner of the popular soccer team AC Milan, entered politics in 1994. Under the slogan, “The new is coming forth," he filled a political vacuum after a series of political corruption scandals. Since then he has ruled Italy with only brief interruptions from left-wing governments.

His opponents accuse him of having an excessive control over the media and of fostering a cult of personality. He currently controls six of the seven major Italian TV channels. Three are owned by his own family, while three are run by the government. In 2008 he ran a political campaign on the slogan “Meno male che Silvio c'è," which roughly translates into, “Thank God Silvio exists.”

Internationally, he has built a reputation for his close friendship with controversial leaders, such as Russia's Vladimir Putin and Libya's Muammar Qaddafi, and for his gaffes, most recently when he described President Barack Obama as “a young man with a good tan.”

While analyst Ivo Diamanti called Berlusconi the “glue” that has held the country together for more than a decade in an editorial for La Repubblica, he says, "Now the glue has run out."

Mr. Diamanti argued that Berlusconi successfully “interpreted the social changes that took place in Italy in the '80s and '90s,” such as changes in business ownership, finance, and communication, but has failed to succeed amid the financial troubles that have beset Europe. “Berlusconi can no longer deliver answers [...] His pompous image of self-made-man has become unpopular."

Historian David Bidussa compares Berlusconi's rise to a “tale of Italian-style capitalism, the last chapter of a system in crisis, that has not renewed itself."

Mr. Bidussa argues that Italy's economic system, with the exception of the luxury industry, is based on the idea of selling the cheapest, lowest quality product to the broadest public. “That's exactly what Berlusconi has done. He has sold the very same image for over 15 years, both with his televisions and his politics," he says.

“Berlusconi is the best example of a political class that's unable to renew itself and come up with new ideas,” says Bidussa.

But others still believe Berlusconi is here to stay. “It's the third or the fourth time I've heard about the supposed end of the Berlusconi era and he's still here,” says Antonio Polito, editor in chief of Il Riformista, a liberal daily.

Indeed, even if his present government seems doomed, some commentators say the prime minister still has a chance to win the next elections, which may be held as early as March.

“Berlusconi still has a great capacity to remain in the public scene,” argues Mr. Polito. On the other hand, the left-wing opposition is weak and divided, while the centrist party recently founded by Mr. Fini, Future and Liberty, still has to prove its public support.

“When he entered politics 16 years ago, Berlusconi was a huge modernizing figure, very close to the productive north. He presented himself as the anti-taxation, no-big-government guy against the old establishment,” recalls Polito.

Since he came to power, however, few things actually changed. As a matter of fact, fiscal pressure has risen during Berlusconi's 2001-06 government.

“Now Berlusconi can no longer present himself as a modernizing figure," says Polito. “His energy is gone and all he has done in the past five years is simply survive politically thanks to the weakness of the opposition.”

The prime minister could continue on the same track for a few years, he says. “Berlusconism as an ideology is gone for good, but Berlusconi himself may still have a political future."

Berlusconi Attempts to Distance Himself from Mafia