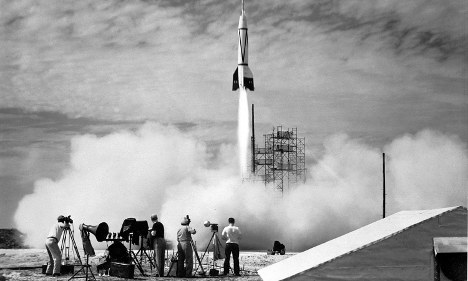 German academic Uta Mense has discovered a bitter rivalry between von Braun and colleagues at the Nazi rocket base Peenemünde, one of whom told the Americans von Braun had had nothing to do with the V-2. More than 3,000 Vergeltungswaffe 2 (Vengeance Weapon 2) ballistic missiles were launched in the final years of World War II.

Paul Schröder worked with von Braun at the Nazi military research facility on the Baltic Sea coast, testing and developing the Aggregat-4, which would become the V-2 rockets. They were two of the four section leaders at the huge facility.

Mense, a researcher at the Brandenburg Technical University in Cottbus, has found documents which Schröder wrote, criticising von Braun’s work, and even later warning the Americans he was making mistakes.  He said von Braun had been excluded from all decision-making in the Aggregate-4 rocket development after having disgraced himself with a series of failed experiments.

This would change the accepted notion of von Braun having been the genius physicist who had been working for the Nazis but was secretly spirited out of defeated Germany in Operation Paperclip, and taken to the United States. There he was held as a prisoner of war, but by 1950 he was employed by the US Army at the Marshall Space Flight Centre in Huntsville, a crucial part of American attempts to get a head start against the Soviets in rocket, satellite and then space development.

Mense’s new evidence puts this into doubt – she has dug up previously-unseen papers from Schröder’s belongings.

Schröder was not taken from Germany as part of Operation Paperclip, but made his own way there in 1952 where he worked for the US Air Force. He later moved into the aerospace industry and returned to Germany in 1958.

She found letters Schröder wrote warning American authorities of mistakes von Braun was making which he said could hinder the development of rocket technology. And his was not the only voice raised against von Braun – Mense has also found evidence that other Peenemünde colleagues were speaking out against him.

She is due to publicise further details from her research at Greifswald University on May 27 as part of a conference marking the 20th anniversary of the museum at Peenemünde.

Would account for the disasterous early years of the American rocket programme. That said those who are overlooked when others are chosen do tend to be a little miffed about it and speak out accordingly.