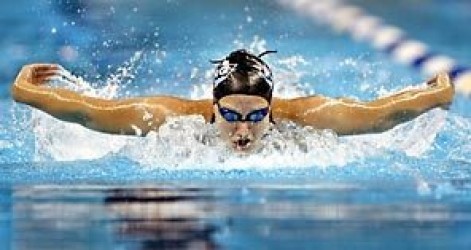 " ... Her paternal grandfather was brought over from Germany after World War II, a member of Wernher von Braun's team that would help send Americans to the moon. ... One in four girls and one in seven boys under the age of 18 will be the victims of sexual abuse. ... "

HUNTSVILLE, Ala. — Margaret Hoelzer squirms in the leather chair, trying to get comfortable. She kicks off the flip-flops and tucks her feet underneath her body. Shifting again, she slings her legs over the side of the chair, revealing the star-spangled toenail polish that still remains from the Beijing Olympics.

She takes a deep breath, ready to reveal her secret - saying she was sexually abused as a child.

Now, the swimmer who won three medals at the Beijing Olympics is ready to share her story and work to make sure what she says happened to her doesn't happen to other kids.

"It's nerve-racking," Hoelzer said in an exclusive interview with The Associated Press. "Some days I feel great about it, and I'm completely at peace with it, completely calm and ready to do this. Then, there are other days where I'm like, 'Oh my God, do I really want to do this?"'

Hoelzer was born 25 1/2 years ago in Huntsville, a north Alabama city tucked into a valley of the Tennessee River, not far from the state line. Her paternal grandfather was brought over from Germany after World War II, a member of Wernher von Braun's team that would help send Americans to the moon.

She proudly points out that her grandpa invented the analog computer, and her father became an engineer in the booming town that grew to be known as the "Rocket City." It should have been an idyllic childhood.

Hoelzer says she was five years old when the abuse by a playmate's father started.

Although the timeline is a bit fuzzy due to her young age, Hoelzer and her mother believe the abuse went on for at least two years, ending when that family moved away.

"I was going to their house on a regular basis," Hoelzer said. "I would spend the night at their house from time to time. ... It was definitely a situation where I was taught to trust that person."

She wasn't even sure what was going on was wrong.

"I didn't connect the dots other than feeling uncomfortable," Hoelzer said. "I think on a subconscious level I knew it. But consciously, I didn't."

Even after the abuse stopped, it took years to realize what happened. Finally, in the fifth grade, Hoelzer was walking in the neighbourhood with her best friend, talking about all the things in life that seem so important to 11-year-old girls. Suddenly, the awful truth poured out.

Heeding her friend's advice, young Margaret went to her mother.

"She was putting up a border in her bedroom," Hoelzer said. "Of course, I go in there and volunteer to help. She's probably wondering why in the world does she want to help me do this? Luckily, it was a very thick border. It took forever to do."

All the while, a child told her story to a stunned parent.

"She was very quiet and listened," Hoelzer recalled. "I remember from time to time, she would say things to kind of prod me along. I was very, very lucky because she 100 per cent believed me. She never questioned it. Most importantly, she just let me talk. She didn't freak out."

Hoelzer's mom immediately told her father. That night, the police were called. The family was directed to the National Child Advocacy Center, which lined up counselling for everyone and showed them how to pursue legal action.

The alleged molester was arrested. There was no real physical evidence because Hoelzer wasn't raped. Also, the passage of time and a child's still-developing memory raised doubts about whether a conviction could be reached in the harsh scrutiny of a courtroom. The case was taken to a grand jury, but no formal charges were ever brought.

That made it even harder to take.

"I was very angry for a long time that nothing happened and he got off scot-free," Hoelzer conceded. "In school, if you did something wrong you would get in trouble for it. You would go to detention or have your parents ground you. It was almost this mentality of, 'How can you do something like that and have nothing happen?' No community service. No fine. Nothing.

She never had any more contact with that family.

She never had any desire to confront her molester.

"I haven't seen him in almost 20 years," Hoelzer said. "I don't even know if I'd recognize him at this point."

Chris Witty, a Winter Olympic gold medallist in speedskating, can sure relate. She, too, was a victim of childhood abuse, violated by a trusted neighbour from the age of 4 to 11. She, too, hid her secret for years.

Finally, after extensive therapy and a triumphant performance at the 2002 Salt Lake City Games, Witty turned to the media to get her story out.

"When I first told the reporter, I had all this anxiety," Witty recalled in a telephone interview with the AP. "You don't know what people are going to say, how they're going to react. What about my friends? Are they going to believe me?"

Once she went public, Witty was overwhelmed by the reaction. She was bombarded with letters and emails, all of them praising her for taking such a bold step. Total strangers came up to reveal their own cases of abuse. Most poignantly, a friend, emboldened by Witty's courage, came forward to reveal being molested.

"As soon as I heard that, I knew it was mission accomplished," said Witty, who now lives in the Netherlands. "I don't think I would have had closure about my abuse issue unless I could tell people about it. Whether they wanted to hear about it or not, I had a need to tell people what happened to me."

Hoelzer is not ready to say she's reached closure, but she's eager to use her plight to help others. She majored in psychology at Auburn, with a minor in criminology. She wanted to learn about the child abuse issue from both sides: victims and perpetrators.

"In my own way, I was self-counselling in college," she said. "Every single paper I wrote in school was about kids who've been molested and sex offenders."

That process goes on. Without telling anyone her motivation, she already has gotten involved with the National Child Advocacy Center, the first of its kind and now one of some 900 branches around the country.

She'll be giving the keynote speech at a big fundraising dinner Friday. Her message will be so much more poignant now that she's come clean about her past.

Chris Newlin, the facility's executive director, points to statistics that show one in four girls and one in seven boys under the age of 18 will be the victims of sexual abuse. He's hopeful that Hoelzer's story will raise awareness even more.

"It's very courageous of her to offer us a face to what a number of children in our country are going through," Newlin said. "There's a lot of value in someone of her prominence coming forward. What it really speaks to is how this affects people across a broad spectrum."

While steadfast in her decision to talk openly, Hoelzer worries about reopening old wounds, especially within her own family.

A tear stream downs her cheek when she mentions the mother who still feels guilty about not recognizing what her daughter was going through, the older sister who still believes she should have been there to protect little Margaret.

Hoelzer is quick to point out that much of her childhood was happy, "normal."

Auburn gave her a swimming scholarship, and she made her first Olympic team in 2004. By then, though, Hoelzer had reached a troubling point in her life, one she eventually traced back to her childhood trauma.

She was no longer swimming the best times of her life. Not even close. Hoelzer finished fifth at the Athens Games in the 200-meter backstroke, a bitter disappointment. Things didn't get much better over the next two years, either. Finally, after a decent showing at the 2006 Pan Pacific Championships but still short of a personal best, she crumpled under the weight of her emotions.

"This isn't normal. I didn't swim that bad," she thought to herself. "Why am I feeling like I have no value as a person?"

Hoelzer, in counselling for more than a year after telling her parents of being abused, decided it was time to return to therapy.

During the process, Hoelzer dredged up all sorts of uncomfortable feelings and memories. But she also began to gain a better understanding of herself.
"I was looking for a sense of peace within myself, and I was looking for a sense of confidence," Hoelzer said. "Since I've been back in counselling, the biggest thing I've learned is that what (sexual abuse) does. It undermines people's value. It undermines their self-confidence. I think that's what swimming was for me for so many years. I was thinking it was something I could control, but it was really a way for me to build confidence."

Removing that burden from her swimming, she blossomed again in the pool. Hoelzer claimed her first world championship, winning the 200 backstroke at Melbourne last year. She set a world record in the 200 back at the Olympic trials and claimed an unlikely spot on the team in the 100 back.

At Beijing, she was beaten in her best event by former college roommate Kirsty Coventry of Zimbabwe, who also reclaimed the world record. Hoelzer was disappointed, naturally, but she also saw the value of silver. And it didn't hurt when she added a bronze in the 100 back and another silver as a member of the medley relay team.

"I wonder if I had won if I would have felt this sense of peace and contentment was just because I won," Hoelzer said. "The fact that I can sit here and say, 'I just won a silver medal and I'm content and at peace with myself,' to me that conveys that it's real."

And time to go public with her secret.

Still, Hoelzer wonders if it's all worth it.

"I still have so many unresolved issues," she said. "My self-confidence is better, it's definitely better. But it's not there all the time. I have good days. I have bad days."

She's never been able to lower her guard long enough to have any sort of meaningful romantic relationship, even as she devours the latest romance novel. She's never been on more than two dates with anyone.

"For me, it's just such a trust issue," she said. "I really have a hard time getting to know people, and letting people get to know me."

Recently, Hoelzer was among the 150 U.S. Olympians who appeared on the season premiere of "The Oprah Winfrey Show." While everyone else revelled in the moment, she looked around nervously, knowing that all those people on stage - not to mention all those people watching at home - would soon know her own painful story.

Only her family and closest friends know what happened. She's never even told any Olympic teammates.

"I think my biggest fear is letting my guard down," she said. "What if no one cares?"