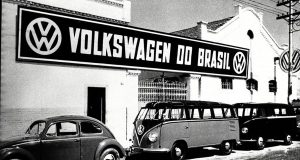 Volkswagen has been summoned before a labor court in Brazil on June 14 and faces accusations of using “slavery-like practices” and “human trafficking” in the country between 1974 and 1986.

The automaker was notified by the judiciary in Brasilia, Brazil, on May 19, reports Germany’s Sueddeutsche Zeitung. The German giant said it is taking these accusations very seriously.

“We can assure you that we take the possible events at Fazenda Rio Cristalino, to which the investigation by the Brazilian investigating authorities refers, very seriously,” Volkswagen told Reuters. “Please understand that we are not commenting further due to possible legal proceedings in Brazil.”

Read Also: VW Revealed to Have Spied on Brazillian Workers and Union Activists

Volkswagen is accused of having been complicit in “systematic human rights violations,” during a period of Brazilian history in which the country was run by a military dictatorship. According to documents made up of testimonies and police reports consulted by the German outlet, the automaker was working on a large agricultural site on the edge of the Amazon basin for the meat trade.

Hundreds of day laborers were recruited for deforestation on 70,000 hectares (173,000 acres) of land via intermediaries but, the outlets report, likely with the consent of VW‘s management.

The site’s workers were allegedly the victims of abuse and violence, which was carried out by armed guards and others. There are also claims that workers who tried to flee were mistreated or disappeared under mysterious circumstances.

One woman claimed that her child died as a result of violent abuse, according to Agence France Presse. Another was reportedly sexually assaulted as punishment. Others, meanwhile, were allegedly subject to inhumane working conditions on the site with some dying of malaria and being buried on-site without having their families informed.

“It was a form of modern slavery,” Rafael Garcia, the prosecutor in charge of the investigation told media. “VW had obviously not only accepted this form of slavery but also encouraged it, as it was cheap labor.”

Former VW employees have been seeking compensation for years and, in 2020, the automaker signed a deal with federal prosecutors in Brazil to pay 36 million reais ($6.4 million USD at the time) in compensation for its part in the military dictatorship and its role in identifying leftist opponents and union leaders, who were then detained and tortured.