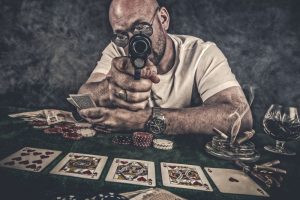 zThere is a common misperception amplified by mainstream media and government officials that people “go crazy” or enter some altered state of consciousness and start shooting. Rather, executing murderous plots such as mass shootings at schools, grocery stores, places of worship, and public events requires a mind that is lucid and capable of producing rational thought, planning, and logical cognitive processing. For example, the 2017 Las Vegas Route 91 Harvest Festival shooter reportedly had extensive notes on distance, trajectory, and wind changes in his hotel room.2 These shooters are often linked with an adherence to ideas and rhetoric that are bandied about as truth on media outlets. On top of that, elected government officials with massive public platforms echo these “truths” and reinforce their so-called legitimacy. The result is a radicalized—not mentally ill—individual absorbing all of this extremist ideology who then takes advantage of the easy access to guns in America.

Highly publicized incidents of gun violence certainly impact those who are horrified by its gruesome details, its criminality, and its cruelty. On the other hand, those with malevolent ideas may perceive a different picture: That gun violence is justified and warranted by civilians in some cases. The acquittal of Kyle Rittenhouse after killing 2 unarmed individuals and wounding another sent a loud and dangerous message: These killings may be justifiable in some cases and viewed as legal and moral.3

It is also important to consider that would-be shooters see what happens when these crimes unfold from execution through legal consequences (if the shooter survives the incident). It may be that the Oxford, Michigan, shooter delivered his preattack messages and blood-curdling doodles as a potential prerequisite to an insanity defense.4 In addition, there are a lot of copycat features to the Uvalde shooting that resemble Sandy Hook in 2012.5 A small number of these teenage shooter situations may be either copycat attempts or a “blaze of glory” means to an end in shooters who may be suicidal.6

The fact of the matter is that ideology, racism, and perceived injustice trump mental illness in many of these cases. To put it bluntly, racism is not mental illness. Because of our deep-rooted history of mistreating populations of color and the maintenance of these beliefs over decades of American history, there has been a legitimate dehumanization of certain individuals7—dehumanization that falsely identifies certain groups as less than human, as enemies, or as needing to be eliminated. This, in part, explains why an 18-year-old white man can gun down an unarmed 86-year-old grandmother in a Buffalo supermarket.8 He did not see past the color of her skin. That is racism—not mental illness. A similar phenomenon occurred in the 2018 shooting at the Tree of Life Synagogue in Pittsburgh.9 That radicalized shooter saw elderly Jews worshiping on a Saturday morning as a threat. That is anti-Semitism—not mental illness. In the case of the 2016 Pulse nightclub shooting in Orlando, we saw a confluence of these factors.10 By most of the available evidence, this shooter was a radicalized Muslim with a particular hatred for the LGBTQ+ community. That is a hate crime—not mental illness. Lastly, in some cases, the shooter has a grievance or is trying to correct an injustice, as was the case in the 2021 mass shooting at a San Jose railyard that left 9 of the shooter’s former colleagues dead. That is vengeance—not mental illness.11

What we are saying is that serious mental illness is not the issue in the majority of these cases. The real problems are easy access to guns, widespread distribution of extremist propaganda and rhetoric, a rise in domestic terrorism, and failure to act by elected officials charged with protecting our citizens. Lastly, quite simply, civilians should not have automatic weapons, and arming guards or teachers is not the solution.6

Dr Norrholm is an associate professor of psychiatry at Wayne State University in Detroit, Michigan, and a global expert on psychological trauma and post-traumatic stress disorder (PTSD). Dr Blotcky is a clinical and forensic psychologist in private practice in Birmingham, Alabama.

9. Deadly shooting at the Tree of Life Synagogue. ADL. October 30, 2018. Accessed May 31, 2022. https://www.adl.org/resources/lesson-plan/deadly-shooting-tree-life-synagogue