Iraqi Oil Supply was Considered to be ‘Vital’ to British Interests 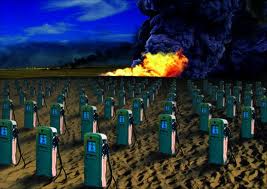 The British Government saw Iraqi oil as “vital” to the UK’s long-term energy security, and the effective privatisation of its oil industry was central to the post-invasion plan for the country, according to previously unseen Whitehall documents.

The UK was already working behind the scenes to ensure British companies did not lose out to competitors in the region, reveal strategy papers that were discussed at the highest level across Whitehall just days after President George W Bush declared “mission accomplished” in May 2003.

Despite Tony Blair and his ministers’ public insistence that Iraq’s vast oil reserves – then estimated at 112 billion barrels – were a matter for the Iraqis alone, officials warned a meeting of the “inter-departmental Oil Sector Liaison Group (OSLG)” that appearing “gratuitously exploitative” in its policy goals – which included the aim to “maximise benefit to British industry and thus British employment/economy” – could “backfire politically”.Minutes of a meeting held on 12 May 2003 starkly spell out the importance of the issue, stating: “The future shape of the Iraqi industry will affect oil markets, and the functioning of Opec, in both of which we have a vital interest.”

The latest disclosures follow the publication yesterday of minutes of meetings held between senior oil-industry executives and government ministers in the run-up to the war – despite official claims that no such talks occurred. The first of three documents assessing the situation in the immediate aftermath of the invasion sets out what is described as “required action” resulting from a meeting attended by representatives from key government departments including the Foreign Office, the then Department of Trade and Industry, the Department for International Development and the Treasury.

Officials cite the oil industry as the “first main target” when asked to establish “where specific prospects for British industry exist and ensure we are properly placed to take them”. The group was also urged to consider when a “senior British oil industry person should go out to Iraq to survey the ground and, if appropriate, participate in [for example] the emerging Oil Advisory Board”.

Two weeks later, London officials outlined a “desirable” outcome for Iraqi’s crippled oil industry as “an oil sector open and attractive to foreign investment, with appropriate arrangements for the exploitation of new fields”.

The paper concluded “foreign companies’ involvement seems to be the only possible solution” to make Iraq a reliable oil exporter. But the document recognised that would be “politically sensitive”, and would “require careful handling to avoid the impression that we are trying to push the Iraqis down one particular path”.

The disclosures are among 1,000 documents obtained by the campaigner Greg Muttitt whose new book, Fuel on the Fire, is published by Random House tomorrow. Mr Muttitt said: “These documents demonstrate again the central importance of oil to Britain’s thinking on Iraq.” A Foreign Office spokesman denied that oil interests had driven policy. “It is normal to consider the commercial risks and opportunities presented by geopolitical events,” he said. “But this is not to say that those risks and opportunities directed our policy on Iraq.”

One leading Tory MP, who asked not to be identified, said yesterday that the revelations “come as no surprise to me”. He added: “In May 2002… a serving officer in the Ministry of Defence said to me: ‘We’re planning for ground operations to start on 19 March next year.’ He [said]… they couldn’t give a damn about the politics. There is no question that the armed services knew it as a racing certainty when the war would start.”

The deal-makers – where are they now?

As Trade minister, told BP five months before the March 2003 invasion of Iraq that the Government believed British energy firms should be given a share of Iraq’s oil and gas reserves as a reward for Tony Blair’s military commitment to US plans for regime change. Papers show that Lady Symons agreed to lobby the Bush administration on behalf of BP. She later took up an advisory post with investment bank MerchantBridge, which profited from post-war Iraq reconstruction contracts. She is an international consultant to lawyers DLA Piper, and for Consolidated Contractors Oil and Gas.

Veteran oilman and formerly BP’s group vice-president in Russia, Caspian, Middle East and Africa. He led a BP delegation to the Foreign Office on 6 November 2002, in which civil servants and oil executives discussed oil-drilling prospects for British companies in Iraq. BP insisted before the war it had “no strategic interest” in Iraq, but in documents disclosed in this newspaper yesterday, it can be seen telling the Foreign Office at that meeting it regarded Iraq as “vitally important” and it would be prepared to take “big risks” in pursuit of business there. Paniguian left BP in 2008.

Since leaving office in 2007, he has made a reported £20m through business engagements. Consultancies he accepted included those with JPMorgan and the Kuwaiti royal family. Has also advised South Korea’s UI Energy Corporation, one of the biggest investors in Iraq’s oil-rich Kurdistan region. Currently serves as a Middle East peace envoy.

As the Foreign Office’s senior economic adviser, he hosted a presentation there for BP on Iraqi oil prospects on 6 November 2002. He went on to become British High Commissioner in New Delhi, and then went to Berlin as British ambassador in 2007. Retired from the Diplomatic Service last year.