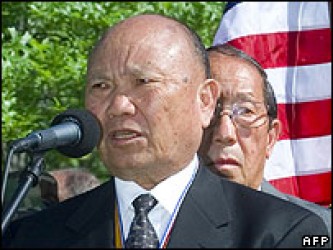 ” … several accounts of Vang Pao say he ruled with an iron fist, sometimes exploiting the poverty of his people both in Laos and the United States.
… Pao’s power in Laos stemmed partly from his control over two of the country’s most important crops: opium and rice. … Survival meant obeying Vang Pao … ”

When Vang Pao was arrested last week on charges of plotting a coup in Laos, it sent shockwaves through the Hmong community in the US.

General Pao is a revered figure for many of Laos’ ethnic Hmong who fought with him in the CIA-backed army during the 1960s and fled with him to the US after Laos fell to the communists.

The 77-year-old has for some been the Hmong leader-in-exile for the last 30 years, helping the refugees build large, successful communities in Minnesota, Wisconsin and California among others.

Such is his standing that there has been talk of naming schools and parks after him.

But his reputation took a severe blow last week when he and eight other respected members of the Hmong community were charged by the US government with plotting to overthrow the Laos government.

They were accused of conspiring to spend millions of dollars on weapons to carry out attacks that prosecutors said would have killed “thousands of people”.

“It’s taken us by surprise, we are shocked by the news,” said Keo Chang of the Hmong-American Partnership in Wisconsin.

“It’s hard to imagine that he is involved in any of this.”

Touger Vang, a university counsellor who works with Hmong students in North Carolina and whose father once worked with Vang Pao, agrees.

“I think many people don’t believe these allegations make any sense, and are hoping they turn out not to be true,” he told the BBC News website. …
http://newsvote.bbc.co.uk/mpapps/pagetools/print/news.bbc.co.uk/2/hi/asia-pacific/6735609.stm

May Ying Ly remembers what it was like when Vang Pao went to speak to Hmong in the Central Valley nearly 30 years ago.

A former general in the CIA’s proxy war in Laos and the cultural leader of the Hmong people, Vang Pao would throw candy to children. Hmong clans and couples would seek him out to resolve disputes.

“He was like King Solomon,” said Ly, 39, now executive director of the Hmong Women’s Heritage Association in Sacramento. “When I was growing up, everyone went for the general’s advice. If they had access to the general, people looked to him.”

Vang Pao, 77, had long advocated that the battle be taken once more to the communists in Laos, a mission the U.S. government supported before the fall of South Vietnam in 1975 and the communist ascendance to power in Laos. But his arrest Monday for allegedly conspiring to mount a coup sent tremors through the tens of thousands of Hmong who settled in California and the Midwest after fleeing Laos.

“The community is in shock,” Ly said.

All Hmong belong to one of 18 clans, and Vang Pao was the leader of the Vang clan. He solidified that clout through a series of marriages — his own as well as those of his children — to influential families in other clans.

His influence extended to the United States because so many Hmong Americans trace their history to the secret war against the communists in the 1960s and ’70s, Um said. For a people forcibly displaced from their homeland, vulnerable and struggling to find a place in a new country, Vang Pao’s ties to U.S. officials were valuable social currency, Um said.

But several accounts of Vang Pao say he ruled with an iron fist, sometimes exploiting the poverty of his people both in Laos and the United States.

Alfred McCoy, a history professor at the University of Wisconsin, said Vang Pao’s power in Laos stemmed partly from his control over two of the country’s most important crops: opium and rice.

Survival meant obeying Vang Pao, said McCoy, who lived in Laos during the secret war as he researched a book, “The Politics of Heroin in Southeast Asia,” published in 1972.

Beginning in the early 1980s in the United States, Vang Pao would intimidate Hmong immigrants to give upwards of $50 a month to Neo Hom, an organization he established to overthrow the Laotian government, McCoy said.

Vang Pao was able to use the money to conduct low-level terrorism in Laos for years because his operational headquarters were in Thailand, according to McCoy. But that ended when the Thai government normalized relations with Laos in 1994, he said.

Stephen Martin, agent in charge of the federal Bureau of Alcohol, Tobacco, Firearms and Explosives’ San Francisco field division, said authorities knew Vang Pao had long wanted to overthrow the Laotian government. But as for being part of an effort to recruit mercenaries and planning to buy nearly $10 million worth of high-powered weaponry — as federal authorities charged this week — “I don’t know that he tried before,” Martin said.

Rocky Vang, 54, said all the Hmong he knew in Sacramento were shocked at Vang Pao’s arrest.

DURING THE VIETNAM WAR

1960s and 1970s: Leads CIA-backed Hmong army in a secret war against Communists in Laos during the Vietnam War.

1972: The book “The Politics of Heroin in Southeast Asia: CIA Complicity in the Global Drug Trade,” by Alfred McCoy, details Vang Pao’s role in controlling the opium trade in Laos.

1975: Vang Pao flees Laos for California after Communists seize power. Becomes chief spokesman for the Hmong community in the U.S. Vows that Hmong in America will return to Laos some day.

1980s: Forms a network called Neo Hom to raise money to aid insurgents in Laos. Over the years, the organization raises millions of dollars, much of it through small cash payments by refugees. Also forms a nonprofit agency, Lao Family and Community Inc., to assist refugees to navigate U.S. social service agencies.

November 2003: In a six-hour meeting at the Prom Center in Oakdale, Pao unveils an 18-page doctrine in which he supports normalizing trade with Laos. Pao’s stunning change in position sparks months of protest and violence in the Twin Cities’ Hmong community.

2005: Minnesota Attorney General Mike Hatch closes the St. Paul-based Vang Pao Foundation after it was found in violation of multiple state charities laws. The organization, founded in 2000 was run by Vang Pao’s son, Cha Vang, who agreed to an injunction prohibiting him from forming, volunteering or working for any nonprofit or charitable organization in Minnesota.

July 2007: Vang Pao and eight other men are indicted in California on charges of plotting to overthrow the government of Laos.

Previous Article
MISSING IN ACTION: Giuliani Quit Iraq Panel after Missed Meetings … but he had Time for Fundraising/Giuliani & the Drug Industry
Next Article
Apocalyptic Times for the GOP Faithful