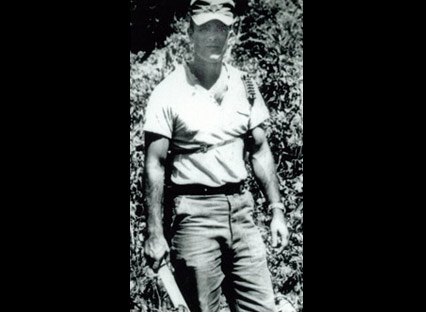 An American missionary's son who became a top CIA Vietnam War-era hit-man in the jungles of Burma, Laos and Thailand has been found dead in his Chiang Mai home, a bullet in his head, a revolver in one hand and a crucifix in the other.

"Bill Young died as he once lived - violently," said a friend.

William Young was 76, a tall, lean, modest and quietly spoken man who belied the image of a CIA killer. He was likened by his British friends to a retired James Bond.

Despite his action-packed CIA career, Young drifted into quiet retirement in his rambling home on the outskirts of Chiang Mai. Disowned by the CIA after challenging US policy in Vietnam and Laos, Young worked at home for the US Drug Enforcement Administration, using the contacts he had built up over the years among the hill-tribes of Laos and northern Thailand.

I visited him over a period of several weeks, working on the script of a film about his extraordinary life. Our long recording sessions were broken regularly by phone calls from his contacts, conducted in at least four different hill tribe languages.

Bill was most at home among the Lahu, who inhabit the mountains of Laos and northern Thailand. Lahu mourners packed a Chiang Mai church, together with other hill tribe representatives, for a traditional ethnic funeral service today.

Hundreds of hill tribe people in traditional dress, including members of the warlike Wa, are expected to attend the burial on Wednesday in Chiang Mai's Foreign Cemetery, a leafy corner of the city watched over by a bronze 19th century statue of Queen Victoria.

Bill's grandfather was a Baptist missionary who converted thousands of Lahu tribespeople in British-controlled Burma in the late 19th century. His father, Harold, also a missionary, pioneered the CIA connection by joining the American intelligence service and conducting spy missions in southern China after Mao Ze Dong's Communists ousted the Kuomintang.

Bill was born at a mission station in Burma and grew up in hill tribe villages, learning at least five local languages and forging friendships that were later to help him in his dangerous espionage work.

Harold Young's Washington connections secured Bill a CIA post, and soon the young operative had gathered an army of several thousand Lahu warriors to help disrupt communist supply lines running through Laos during the Vietnam war. "Killing was part of the job," he told me, detailing several scenes where he had shot his way out of tight corners in remote hill tribe villages.

Although Laos was officially neutral, US special forces penetrated deep into the landlocked country as the Vietnam war raged, while US aircraft bombed border sections of the Ho Chi Minh trail which carried North Vietnamese supplies southwards. The US did all it could to cover up its Laotian operations, which came to be described as the 'Secret War'.

At the height of the fighting, Bill was air-dropped into the mountains of central Laos to find a suitable site for an airfield base. He scoured the mountainous, forested terrain on foot and finally found an ideal valley near the Plain of Jars. (The photograph at the top of the page, which was on display in Young's living room in Chiang Mai, was taken during this period.)

The CIA operation known as Air America based itself there and within months the airfield, named Long Cheng but which appeared on no map, had grown into one of Southeast Asia's busiest.

"It was a small city," Bill told me. "It had brothels and bars, casinos - everything a serviceman could ask for. But it had a church, too."

Bill's base as a CIA operative was a comfortable house on the Thai banks of the Mekong River, opposite Laos. He liked to party, and his home became open house to a steady stream of air hostesses and nurses heading for the Air America base. Bill married one, but the marriage ended in divorce.

"She was a very beautiful woman and I loved her dearly," Bill told me. "But she persuaded me to return to the US and take a regular job there. I lasted only a few months - my real home was among the Lahu."

Bill died with one ambition unrealised. A major Hollywood film studio paid him $100,000 for the rights to his story, but the movie he wanted to see arrive on the big screen was never made. Some say the disappointment fuelled the depression that haunted him in later life.

Attempted Bombing of Flight 253 as Justification for Military Operations