OWSLEY STANLEY – THE MAN WHO DRUGGED THE WORLD 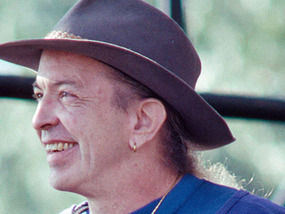 Among them was Augustus Owsley Stanley III, who was born in Kentucky in 1935 and whose grandfather of the same name had been governor of that state. Studying at the University of Berkeley, just across the bay from San Francisco, he dropped out after less than a year having discovered the recipe for LSD in a chemistry journal. He reputedly made 1.25million doses between 1965 and 1967.

His makeshift laboratory was raided by police soon after he started but since LSD was not yet illegal officers were forced to give his equipment back. With a reputation for making the purest product Stanley became the official supplier to novelist Ken Kesey, who had been introduced to the drug as a CIA volunteer and now organised “acid test” parties where guests sipped from LSD-spiked punch.

Meanwhile Jimi Hendrix’s song "Purple Haze" was said to be inspired by a potent batch of Owsley acid.

When the drug was made illegal in California in 1966 Stanley carried on running a secret lab. This was raided in 1967. He escaped jail but finally went to prison for two years when he was arrested for possessing marijuana and a judge revoked his bail. “I wound up doing time for something I should have been rewarded for,” he said in a rare interview with the San Francisco Chronicle in 2007. “What I did was a community service, the way I look at it. I was punished for political reasons. Absolutely meaningless. Was I a criminal? No. I was a good member of society – only my society and the one making the laws are different.”

That may not convince everyone but he certainly did not conform to the standard image of a drug baron. Because the doses involved in taking LSD were tiny it was difficult to manufacture the drug in modest quantities and Stanley gave a great deal of it away in order to keep the street price down. He said he wanted to get out after it became illegal but he felt an obligation to the hundreds of thousands of hippies who were switching on to the new psychedelic consciousness.

“I got to San Francisco in 1967 and we were definitely happy customers of Owsley Stanley,” says Ben Collins, now an HIV consultant in his 60s but then a student at Stanford University. He recalls travelling to a desert gig by the band Jefferson Airplane, where lead singer Grace Slick kept whispering the refrain “Drop acid, drop acid” into the microphone.

Collins and his friends didn’t know what this meant – but by the end of the summer they did. Colins says: “It had a transformative influence on the college campuses and the major hip cities. A lot of people dropped out and Stanford virtually shut down for a while. It felt creative and incredibly positive and you really did have the impression that if everybody just lived together dropping acid it would solve the problems of the world.

“We were watching terrible images from Vietnam on the news every night and all the young men taking LSD were facing the draft so there was an incredible need to escape from the world to some other place and ‘get out of it’. It’s no coincidence that the anti-war movement became so powerful at that time.” Young people flocked to Haight- Ashbury to take part in what became known as the Summer of Love. By the autumn of 1967 the leaders of the hippie community pleaded with them to stop coming and to take the counter-culture to their home communities instead.

By that time LSD was becoming embedded in the culture – and not just in songs by bands such as the Grateful Dead, for whom Stanley worked as manager and sound engineer. The Beatles’ album Magical Mystery Tour was clearly inspired by psychedelic imagery and the BBC banned their song "Lucy in the Sky with Diamonds" because of the cheeky abbreviation its title seemed to spell. Meanwhile the drop-out communities with their new ways of living spawned new movements for women’s liberation and gay rights, and lent valuable support to the growing civil rights movement.

Not everyone was impressed. The writer Joan Didion went to stay in Haight-Ashbury and wrote of the squalor she found there, with lost teenagers sought by frantic parents and rape dressed up as free love. “We are seeing the desperate attempt of pathetically unequipped children to create a community in a social vacuum,” she wrote. “We had somehow neglected to tell these children the rules of the game we happened to be playing. They are less in rebellion against the society than ignorant of it.”

For his part, Stanley moved to Australia, became a great-grandfather and was said to have become less crabby with age. “I never set out to change the world,” he said. “I only set out to make sure I was taking something [where] I knew what it was. And it’s hard to make a little. My friends all wanted to know what they were taking too. Of course, my friends expanded very rapidly.” Unlike later kinds of recreational drugs, LSD is not addictive. Some heavy users reported “flashbacks” but these are no longer officially recognised as a psychiatric symptom.

The main danger was an impaired ability to make sensible judgments and understand common dangers. According to one popular urban myth, people tended to jump off buildings because they thought they could fly. Today the drug has largely disappeared, partly because the new way of looking at the world lost its attraction. “After lots of acid trips I got jaded,” recalls Collins. “‘Same ol’ eternal verities,’ I would mutter at the end of another 24-hour trip.”