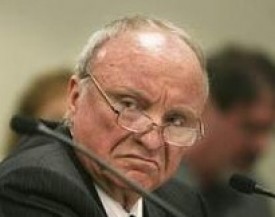 SALT LAKE CITY — Utah State Senator Chris Buttars is proposing a new resolution designed to repeal the recently passed anti-bullying and non-discrimination policies created by the Salt Lake School Board. Buttars calls the policies a “program to bring down America.”

Buttars was recently named as chair of the State Public Education committee, despite his call in 2010 to eliminate the 12th grade as “unnecessary.”

It appears he plans to use his latest position of power as much as possible in his war against civil rights. His proposed resolution, SJR 1, strips the State School Board of the power to make changes to their policies unless they are already provided by statute.

In other words, take away the protections for straight and LGBT kids from bullying, and the non-discrimination rules for district employees.

“We’re in big trouble in our public education system. I didn’t realize how much until a month ago when I was asked to chair public education appropriations,” said Buttars, speaking at a meeting for the anti-gay group Eagle Forum. “We met and when we got done we were all so terrified we couldn’t believe it. This was right under our nose.”

“By accepting that, there’s no God because he deals in absolutes,” said Buttars. “This is an entire program to bring America down and I want to tell you right now it’s well entrenched in Utah.”

Other speakers at the Eagle Forum called the anti-bullying and non discrimination policies a “Socialist and Communist plot to take over children.”

In 2008, Buttars caught the ire of of Utah’s minority community, when he referred to an education bill he apparently took issue with as the “ugly baby” bill, saying, “This baby is black … this is a dark, ugly thing.”

PRIDEinUtah is organizing a rally on the opening day of the Utah Legislative session, Jan. 24 at 5:30pm in the rotunda of the Utah State Capitol Building.