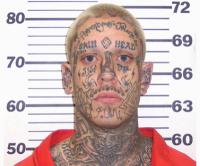 Mugshot of Curtis Michael Allgier, who allegedly shot and killed guard during escape from University Hospital before being apprehended after car chase at a fast food restaurant. (Utah Department of Corrections)

A 27-year-old white supremacist was alone in an examination room with a 60-year-old corrections officer when he grabbed the cop's gun, fatally shot him in the head and escaped Monday morning, police said.

Police said they are unsure how the state-prison inmate got free of hand restraints or got hold of the officer's gun.

Curtis Michael Allgier, 27, was reporting for an MRI on the first floor of the University of Utah's Orthopedic Center for treatment of lower back and leg pain about 7:45 a.m., police said. A tussle ensued between Allgier and Corrections Officer Stephen Anderson, and Anderson ended up dead on the ground from a gunshot wound.

Allgier ran out of the hospital's front entrance in his orange prison jumpsuit, gun in hand and free of ankle or wrist restraints, police said. He ran a half block and carjacked a Ford Explorer on Foothill Drive and went west, police said.

Officers staked out an address where a known associate of Allgier lived and spotted the Explorer in the area, about 900 West and 400 South, police said. Allgier then led police on a lengthy pursuit that reached speeds up to 100 mph on Interstate 15, Interstate 80 and Interstate 215 before ending at an Arby's restaurant at 17th South and Redwood Road about 8:30 a.m., police said.

Inside the Arby's, an employee and a customer fought with Allgier, police said. One man wrestled the handgun from Allgier and sustained a head injury in the process.

Allgier shot once inside the Arby's, and a Salt Lake City police officer fired once outside, police said. It was unclear who the officer -- at least 10 officers were at the scene -- was shooting at, police spokesman Sgt. Rich Brede said. Nobody was hit by those rounds. The Salt Lake County Sheriff's Office is investigating the shot fire by police.

Detective Gary Trost said he saw officers drag a man out of the Arby's. Police said they believe the same man wrestled the gun from Allgier.