" ... The main purpose ... was 'to make the Allies’ post-war task as hard as possible so that the Nazi party could, in time, reappear in a suitable disguise and build up a fourth Reich.' ... ” 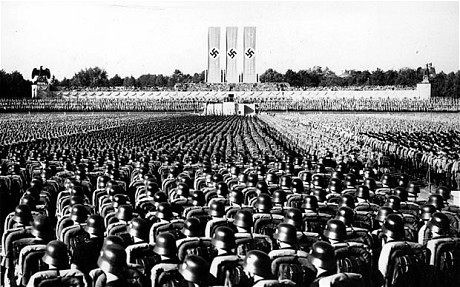 The interrogation of a French collaborator revealed he had attended a conference near Munich in mid-April 1945, a few weeks before the end of the Second World War, presided over by an SS officer in full uniform in which the plans were discussed.

The agent, Olivier Mordrelle, was caught and interrogated in Italy three months later, and a report produced for MI5 that was marked “top secret,” describing his reliability as “good.”

The meeting, in a district called Deisenhofen, included 15 representatives from countries to the West of Germany, including Italy, and they were apparently told about a “great plan of promoting post-war unrest.”

In the report, released by the National Archives, Mordrelle told his interrogators:

“The speaker then proceeded to relate how ample funds had already been planted in South America, mainly in the Argentine, and would become available for financing agents in due course. In order to have ‘bankers’ who could distribute this money, certain trustworthy key men had already been sent to live in Spain and Switzerland.”

The agents were to lie low for a “certain period after the end of the war in Europe” and at a given time were to start organising “national movements” which would be “thoroughly in keeping with the traditions of each country but which would all preach anti-Bolshevism and stir up unrest culminating in civil war.”

“If the cult of anti-Bolshevism were not particularly popular, then any other sore point, such as the burden of supporting an army of occupation or of having to cede territory might be seized on,” Mordrelle told his interrogators.

The main purpose, he said, was “to make the Allies’ post-war task as hard as possible so that the Nazi party could, in time, reappear in a suitable disguise and build up a fourth Reich.”

The cardinal rule was that no movement was to make any mention of its pro-Nazi sentiments or to indulge in anti-Semitic propaganda.

“Each movement should also strive to create different slogans, methods of approach to the public, initiation ceremonies, ranks, etc, in order to lessen the risk of the affinity between movements being suspected,” the report said. “Clandestine cooperation between movements in different countries was not envisaged, at least at the beginning.”

The Nazis apparently planned a three-layered organisation that included a “shutzgemeinschaft” outside Europe that would direct “high policy”, second layer that would make policy and a first layer that carried out “moral propaganda work” for the various movements.

Mordrelle was told to head to Spain and contact a French agent at the Ritz Hotel in Madrid.

The file added: “Source states that this last meeting had a strange air of unreality. He had the feeling that last minute plans were being made in words and on paper when all the persons present were secretly preoccupied with the idea of how they could best save their skins.”

Mordrelle had performed a number of roles for the occupiers, culminating in being appointed French representative for post-war activities by the Nazi party's intelligence agency, the Sicherheitsdienst.

He was also said to have had contact with nationalist movements in Ireland, Wales, Scotland and Cornwall. The agent was described as 45, 5ft 7ins tall, and 145lbs, with greying hair and glasses, he was said to have a pale complexion, a moustache and false teeth.

He was said to be a former architect who designed warehouses and reinforced concrete garages for Renault and then for a firm specialising in theatre acoustics. He had served as a lieutenant in the French army but fled to Germany in 1939, believing that the “Germans would conquer the West completely and that in any case they would have the most understanding for his [separatist] aims.”

Mordrelle was sentenced to death by the French military authorities in May 1940 for continued political activity in connection with the separatist movement and for failure to report for military service.

He was said to have been involved with the IRA and described how a man called “Scarface,” thought to be Dr Hermann Goertz, parachuted into Ireland in 1940 but was caught because he failed to destroy his German uniform.

His family was paid 5,000 Francs a month by the German secret service the Abwehr throughout the war and Mordrelle was seeking to “vanish from French sight in order to escape the death sentence or a term of imprisonment.”

The report added: “It is concluded, however, that the French authorities are best able to deal with him.”