Democracy – in the Hands of Rupert Murdoch

The Doublethink of 'Democracy' 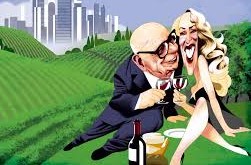 If The Sun took the democratic rights of the Brits seriously it would campaign for Murdoch's influence to be extirpated from British political life.

Democracy is a rather unusual political value - everyone seems to be in favour of it. Just think of the regimes that have clamoured to call themselves democratic.

History provides examples as striking as the grotesque pantomime of the authoritarian Stasi-land of the old East Germany describing itself as the German Democratic Republic.

Despite its governing ideology being anything but democratic, the prestige of democracy meant that the DDR (like so many other unsavoury regimes) was eager to pay lip-service to the idea, while simultaneously treating its people with utter anti-democratic contempt.

A less extreme example of exploiting 'democracy' in very bad faith comes with the current campaign being waged d by the tabloid press to force Gordon Brown into calling a referendum on the EU’s reforming Lisbon treaty.

The Sun merrily brandishes appeals to the democratic rights of the British people in trying to force a referendum, but it is hard not to conclude that its commitment to democracy is, at best, rather partial and selective.

Indeed, these appeals to democracy seem to be a sort of self-serving doublethink that echo the worst examples of using the rhetoric of democracy in the cause of its suppression.

Let me explain why.

Any plausible commitment to the values of a democratic society will minimally involve the thought that there should be a degree of political equality.

Citizens should not only be equal before the law, but should have an equal opportunity to influence the outcomes of democratic deliberation.
If we are to have government of the people, for the people and by the people - in Abraham Lincoln’s phrase - then we need to take seriously the thought that the people’s voices need to be heard.

The political philosopher John Rawls, in defining his principles of justice for a democratic state, talks about the significance not only of ensuring that citizens have equal basic liberties (such as freedom of speech, freedom of association and the right to vote), but of further ensuring equality in the fair value of the rights and liberties involved in political life.

Without such commitments to the fair value of our rights and liberties, invoking democratic ideals can look like an empty charade, devoid of genuine substance. In other words, if we take democracy seriously, we need to walk it like we talk it.

But what would be involved in delivering a truly democratic society, in which citizens' democratic rights were not merely a charade – all form and no substance?

Well, one thing it would certainly involve is some restrictions on the ownership of the media, so that it could no longer be the case that the content of public political debate is decided by the private interests of a few rich proprietors, like The Sun’s Rupert Murdoch.

If The Sun took the democratic rights of the British people seriously, then it should be campaigning for the influence of foreign tycoons like Murdoch to be extirpated from British political life. Needless to say, we shouldn’t be expecting this to happen anytime soon.

Murdoch and the other proprietors are rational enough. They fear the EU because it has the potential to develop the political confidence and regulatory heft to break up their cosy little empires.

Concerned at the terrible prospect of the balance of political power slipping away from him, Murdoch will do whatever he can to maintain the status quo.

To accommodate his aims, his journalists whip themselves up into a self-righteous lather about democratic values. But taking democracy seriously is not something that can be done whilst the mechanisms for the transmission of political debate are in the hands of a self-serving plutocracy.

Now, none of this is to take a stance over whether the Lisbon treaty should, under ideal circumstances, be subjected to a referendum. But, under our current extremely non-ideal circumstances, the answers are very clear. It is better, on democratic grounds, to have Britain’s foreign policy in the hands of our elected representatives, than to grant a power of veto to our bloated press barons.

As Stanley Baldwin succinctly put it in 1931, quoting his cousin Rudyard Kipling during his campaign on free trade against Lords Rothermere and Beaverbrook, Murdoch and his ilk have “power without responsibility, the prerogative of the harlot throughout the ages”.

Baldwin was quite right: government by harlot falls far short of the democratic ideal. Hypocritical appeals to the values of democracy, issued from the mouthpieces of harlots, are surely even worse.

No doubt there are tabloid journalists who believe everything they write about the democratic threats from an invented, hyperbolic EU superstate.

Such views of course deserve their airing. But it is hard to take them seriously when they can clearly be seen to mesh so neatly with the wishes of those, like Murdoch, who have most to lose from an organized EU that gets its act together on trans-border corporate taxation and media regulation.

Euroscepticism could be taken much more seriously if it was aired under conditions that ensured the fair value of the political liberties, rather than in currently less-than-democratic political world, where Rupert Murdoch’s political liberties are worth a lot more than yours or mine.

I’ll finish with two quick points. Firstly, through the law of unintended consequences, the very factor that makes Britain comparatively weak within the EU is our Eurosceptic press. Gordon Brown needs political cover in his efforts to avoid a referendum, and so has to cede the political agenda to other member states as part of the quid pro quo.

A saner and more balanced press at home, leading to a more thoughtful political climate on the subject of Europe, would create the conditions for more British leadership within the EU on trade, development and, perhaps most importantly, reform of the Common Agricultural Policy. A more fair and democratic Britain, unconstrained by the need to pay tribute to Murdoch, would have more real political power where it matters.

Secondly, if we want to achieve the sort of fair value of political rights and liberties that is a precondition for a robust democracy, then we (of course) need our politicians to get to grips with the issue of press ownership.

This will involve some political fights that will be messy and difficult.

Politicians who are used simply to reactive forms of media management need to think themselves into a broader context. They need to get off the back foot, and onto the offensive. Murdoch’s power isn’t an unavoidable fact of our political life. It’s a disfiguring distortion that can be eradicated by concerted political effort.

Stanley Baldwin may be an unfashionable figure these days, but those who care about democracy should welcome a revival of Baldwin’s rapier-thrusts against Beaverbrook and Rothermere. If we take democracy seriously, as a real value rather than an empty form of words, then Baldwin’s fight needs to be fought all over again.